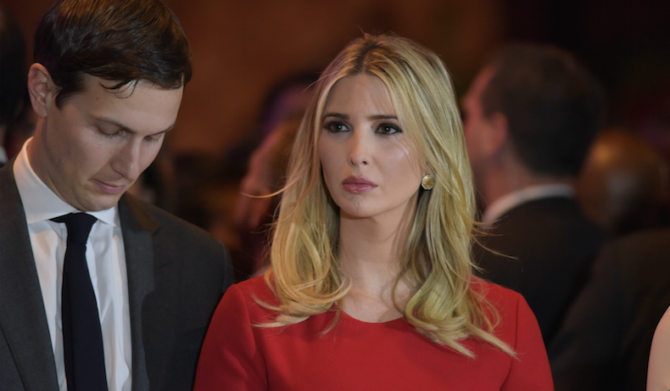 Donald Trump is known for his aggressive and inappropriate use of social media, his bombastic rhetoric and his paper-thin skin. Do something to cross him and he has no problem — even as President — throwing his full weight at you. The free press becomes the “enemy of the American people,” Nordstrom is “Terrible!” And we won’t even get into the things he’s said about women.

Yet there’s one woman in Donald’s life who seems to be immune from his ever-intensifying tornado of hot air. Daughter Ivanka is, by comparison, a master class in poise. But while her ever-so-tasteful persona may seem at first like evidence that the apple does indeed fall far from the tree after all, there’s another way of interpreting Ivanka’s image, and it all has to do with branding.

And that’s when things start to get a lot more blurry.

A new Buzzfeed analysis by Anne Helen Peterson looks closer at Ivanka’s actions over the last month of her father’s administration:

Ivanka has maintained her silence — seen, via her social media, but not heard. When Nordstrom dropped her clothing brand on February 2, she posted a video of her daughter, Arabella, singing a song for Chinese New Year. When her father lashed out on Twitter about her “unfair” treatment by Nordstrom, instead of responding to the press, she posted a photo of herself “taking a call in the White House” with her “personal assistant,” aka her infant son, Theodore. After [Kellyanne] Conway encouraged audiences to “buy Ivanka’s stuff,” her social media accounts remained silent for most of the day — and then posted a video of Ernst & Young CEO Mark Weinberger praising her for making women in the workplace “a top issue.”

In normal times, Ivanka’s meticulous polish might seem classy (with a ‘c,’ not a ‘k’) if not altogether presidential. But these are not normal times. It’s the contrast between Ivanka’s demeanor and her father’s destruction of the same ideals she would have us believe she stands for — to always take the high road, to stay on message even if it means growing a thicker skin — that ultimately neutralize her brand.

And we’re not just talking about her clothing and accessories line. If there’s one thing she’s picked up from Dad, it’s “always be branding.”

Ivanka’s force field is composed of her innocuous image, her carefully cultivated figure, her children, and her silence. Together, they compose a particularly 21st-century propaganda aesthetic — one that attempts to blind us to the discrimination and destruction committed by her father and performed in the name of rebuilding America. That aesthetic, of course, also excuses Ivanka: Her social media is her plausible deniability, constructed with the same sort of precision as a criminal crafting an alibi. The question remains: Will historians of the future look to Ivanka’s digital footprint and excuse her…or look to her willful blindness and condemn her?

Which do you think it will be?

disorder in the court
76