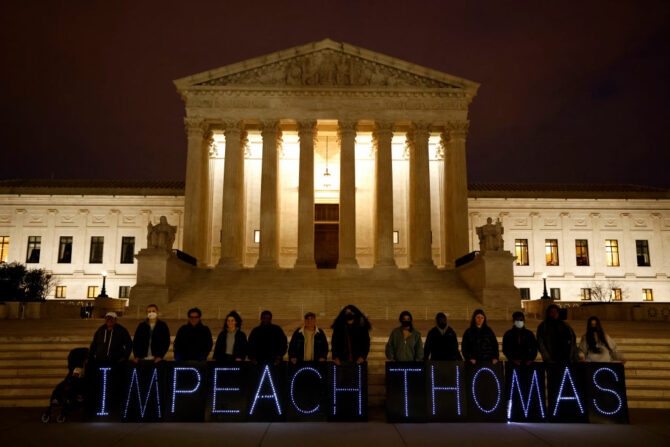 More trouble is brewing for Clarence Thomas and his wife, Ginni.

On Friday, the Lincoln Project released a video calling on the Supreme Court Justice to recuse himself from cases involving the January 6 Capitol riot after it was revealed Ginni, who hates LGBTQ people and believes “transsexual fascists” are ruining America, texted with ex-White House chief of staff Mark Meadows about overturning Biden’s victory in the weeks following the 2020 presidential election.

“The rot in the GOP has made its way to the highest court in the land,” the group tweeted, along with the video, which received nearly 675,000 views over the weekend. “Justice Clarence Thomas is compromised and must recuse himself.”

The rot in the GOP has made its way to the highest court in the land. Justice Clarence Thomas is compromised and must recuse himself. pic.twitter.com/mi9kytDuQQ

“Thomas did not hide that he was willing to grant Trump’s request for secrecy,” the video’s narrator says over ominous music. “But it wasn’t just to protect Trump and his conspirators. It was to protect his wife, Ginni Thomas.”

The video then states the House committee investigating the insurrection cannot do its job “if one of the most powerful men in the country is using his seat to protect his best friend.”

“Clarence Thomas must recuse himself because he took an oath to protect the Constitution, not his wife,” it says.

The video comes amid calls from dozens of Democratic leaders and lawmakers for Thomas to recuse himself, with some going so far as to suggest he be impeached. An online petition calling for his impeachment has garnered almost 170,000 signatures and counting.

Neither of the Thomases have commented on matter, but in a recent interview with the Washington Free Beacon, Ginni insisted they have their “own separate careers, and our own ideas and opinions too” and that her extreme right-wing activism has absolutely no influence on his Supreme Court rulings.

In January, the Supreme Court rejected Trump’s bid to block the release of certain presidential records requested by the January 6 committee. Thomas was the only one of the nine justices who dissented. He provided no explanation for why he would have approved Trump’s request to withhold potential evidence.

Why didn’t anyone listen to Anita Hill?! 🤬🤬🤬

The American people have to voice their outrage.

The SCOTUS garden is decades ripe with Federalist Society fertilizer.

Since no one is making him accountable and he doesn’t appear to have a conscience, how will this happen?

It’s always been there since Thomas was confirmed.

The rot became evident with Thomas, Kavanaugh and Barrett thanks to the rotting GOP who shuffled them through.

The rot has been there.