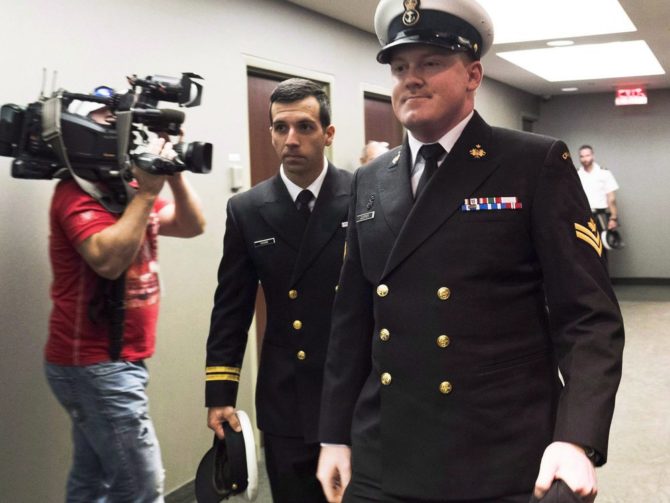 A Halifax sailor testified before a military court this week about the time he woke up in his bunk to find one of his superiors performing unwanted oral sex on him.

The alleged incident happened at the hands of Master Seaman Daniel Cooper, a naval communicator, in November 2015 on a navy destroyer stationed in Rota, Spain.

The victim, who identifies as straight, told the court that he had went to bed around 1 AM on November 10, 2015 after having a some drinks with friends. He woke up three hours later to find someone performing oral sex on him.

He tried alerting his lower bunkmate, but he says his cries for help were ignored.

It wasn’t until the junior sailor allegedly told Cooper, “I’m not gay,” that he stopped. Cooper allegedly replied, “Oh, sorry,” and then promptly left.

Cooper is accused of sexual assault and ill treatment of a subordinate. He has pleaded not guilty to the charges. During cross examination, his lawyer, Philippe-Luc Boutin, tried telling the victim he was “very drunk” and that the sex act was consensual.

“I’m going to suggest to you … that your account of that night is not the truth,” said Boutin. “You made up a story because it was more convenient for you.”

To which the junior sailor boldly replied, “I was raped.”

Before the victim was dismissed, Military Judge Cmdr. Sandra Sukstorf said, “Thank you for coming forward to tell your story.”