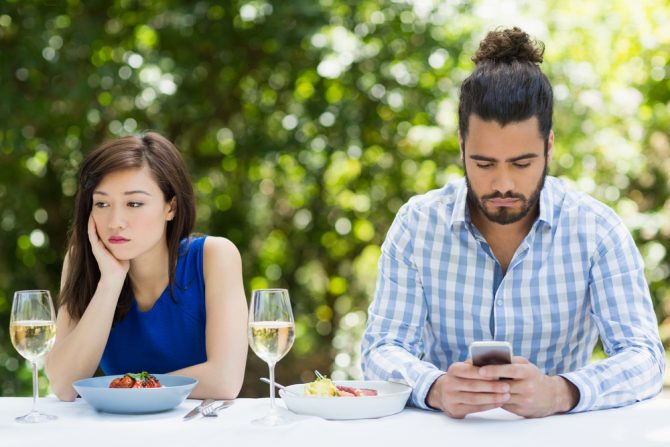 A U.K. woman was completely thrown for a loop when her date started cruising for sex on Grindr in the middle of dinner.

“About six months ago, I went out with a man who started cruising a popular hook-up app for gay men… in the middle of our date,” she writes in an anonymously penned essay published by Refinery 29.

The woman describes the guy as “hot in a 2D, poster-on-your-wall kind of way” with “solid shoulders” and “an authoritarian dad vibe.” In other words, totally average, but still sorta cute.

“As the night wore on, the cheap wine started to taste better and my date began to loosen up,” she continues.

That’s when she learned her date was a Tory, which is more or less the British equivalent of a Republican. Not only that, but one his favorite pastimes, aside from embracing conservative political platforms, is hooking up with dudes on the DL.

“He started telling me about how he likes to meet men on hook-up apps for blow jobs,” she writes. When she asked, “So you’re bi?” her date replied by saying “he absolutely was not bisexual, it was just ‘a joke, a bit of naughty fun–not something I’d tell my mates.'”

She continues: “When I asked more about his secret habit, he said: ‘It’s so easy with men, look…’ He started cruising and matching with nearby guys. At first it was kind of interesting, until I realized he seemed more into the app guys than me.”

“I had to draw the line when he said: ‘I bet I could get a guy to come here right now.’ I said: ‘Please don’t.’ He replied: ‘See, I imagine that you’d find it a massive turn-on to watch a guy suck me off but then, maybe not… Dating is such a learning curve.'”

After the night ended, the woman says the guy suggested they meet up for a second date.

“I said we’d probably be better as friends,” she writes, adding, “I still think about him sometimes and wonder whether he’s any closer to owning his sexuality, whatever that may be.”