Yesterday’s GOP presidential debate—the most recent episode of Real World Bizarro Land—proves once again that being unmoored from reality is the way to get ahead in Republican politics these days. What livened the debate is the continuing saga of Herman Cain, ex-pizza czar and accused serial harasser. Only in the current Republican field, in which the right-wing base is desperately seeking the an 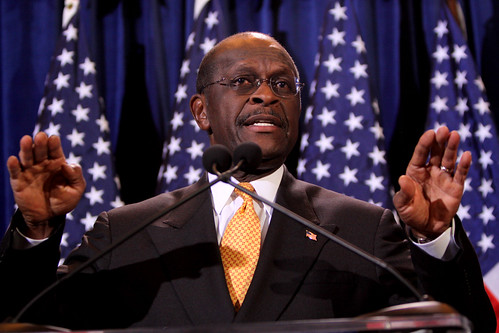 ti-Romney, would Cain have any credibility. He lacks a campaign infrastructure in the key early states, doesn’t know the first thing about foreign policy and has given every indication that he’s actually running for bigger speaking fees rather than for president.

Cain’s handling of sexual-harassment allegations (four and counting) while he was president of the National Restaurant Association has been a case study in how not to deal with a crisis.

His defense boils down to is this: Cain doesn’t know any of the women, except that he does, and the NRA didn’t have settlements with them, but the NRA did have agreements with them, and it’s Rick Perry‘s campaign that leaked this story, but it was really the Democrats who leaked it.

Oh, and it’s all the liberal media’s fault.

Cain used the debate to defend his integrity, speaking of himself in the third person as if he were the Pope: “For every one person that comes forward with a false accusation, there are probably thousands who will say that none of that sort of activity ever came from Herman Cain.” (Always good to hedge your bets with “probably.” You never know.)

Of course, sexual harassment doesn’t lend itself to the same mathematical magic that Cain’s 9-9-9 tax plan does. The only number that counts is zero, as in the number of accusations that you should face. Needless to say, Cain got a big round of applause from the Republican faithful in the audience, but it’s clear from the polls that enough doubts have been sown that Cain will likely have to content himself with a commentator spot on Fox instead of measuring the White House drapes.

The other moment of note in the debate (other than Rick Perry channeling Ronald Reagan post-Alzheimer’s) was the Republican insistence that Barney Frank single-handedly caused the housing crisis. Republicans have tried this meme before, but it’s worth pointing out the conservative dog whistle that’s being sounded here.

Barney Frank is not just the conservative’s nightmare of a super-liberal. His name is also shorthand for gay, and all the lavender-menace panic that inspires. (Who can forget Rep. Dick Armey’s “Barney Fag” slip?) This time it was Romney who sounded the call, blaming Frank (and former Sen. Christopher Dodd) for legislation aimed at correcting Wall Street abuses. Way to go to shore up your conservative credentials, Mitt!

Also, thanks for pointing out that you’re a man of steadfastness because you’ve been married for 42 years (without even a whiff of sexual harassment!).

Grant us the same rights and we’ll be able to say the same. Probably.