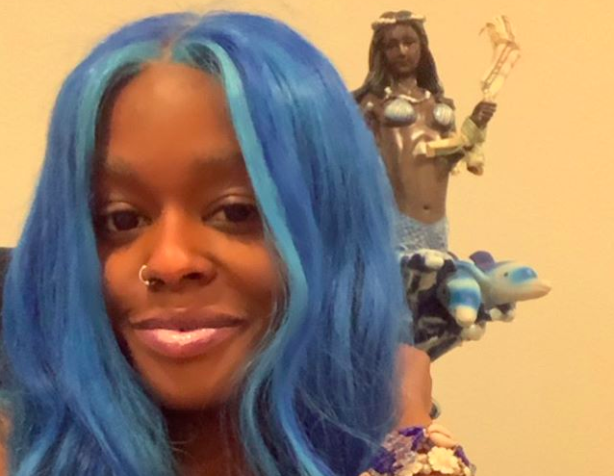 Azealia Banks is at it again.

Last week, the 29-year-old rapper made headlines for saying Kanye West was faking his bipolar disorder to cover up the fact that he’s a “closeted homosexual,” then threatening to expose all the “homo sh*t” he’s done.

Now, she’s making headlines again, this time for posting a string of cryptic messages to her Instagram Stories, including suicidal ideations about how her “tenure here on earth” may soon be over.

“This pandemic, extreme lack of social interaction, no intimacy, combined with the constant public ridicule is making life harder than its worth.”

“I think I will end my tenure here on earth soon.” 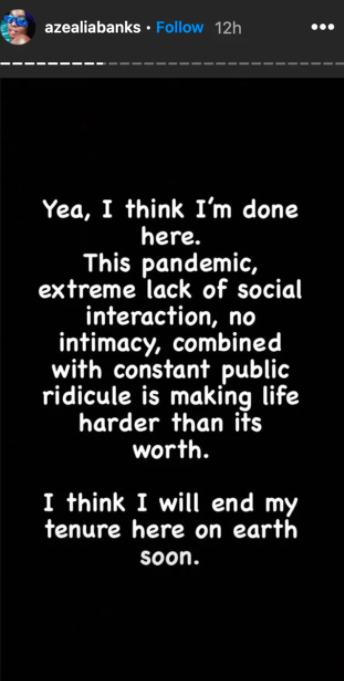 Later, Banks said her suicidal post was not meant to be a cry for help, nor was she “begging for attention or asking for sympathy/empathy.” It’s just that her “soul is tired.”

“I’m just ready to go,” she wrote. “Peacefully of course.”

“I will document my last times and release a film for you all to finally understand me, From my perspective.” 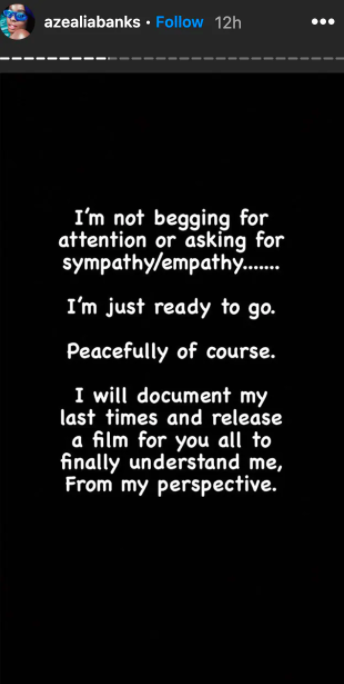 Naturally, the whole thing set off a wave of concern on social media.

this is sad, actually. i mean one of the most talented artist in our generation, azealia banks deserve better. pic.twitter.com/cK6MlkWl9p

My Partner is a counsellor and he told me about signs of suicide. Many think suicidal is committed in a state of mania, anger, or craze – but in reality its done when they are calm, relaxed, and assured in themselves. Azealia Banks instagram posts are a serious cause for concern.

This worries me so much. I hope someone close to Azealia reaches out to make sure she’s doing okay. She’s such a powerful human being and a lovely artist and I just want to see her thrive and be happy?? I wish I could hug her right now. pic.twitter.com/awQspywsZa

Its sad to see why Azalia Banks is trending today. Apparently she posted ominous suicidal messages on her instagram account and people are worried about her. Like Kanye, she lives with bipolar disorder. I hope she and Kanye can help end #Stigma about #SeriousMentalIllness

azealia banks, you are worth it. you are enough. and you are talented. dont allow this pandemic or lack of social interaction put you in a depressed state. you are loved and cherished. dont do anything irrational. i love you. ?

But not everyone was so concerned.

@AZALIABANKS she does this every once and a while for some clout. Bored at this point ?. Just wait till next month where she continues to be homophobic and problematic ?. pic.twitter.com/FhJ5BtfSMh

Today, Banks posted a video to Instagram laughing at her fans and calling it “really f*cking funny” that they thought she was suicidal.

Evidently, the whole thing wasn’t meant to be serious, so the joke’s on anyone who believed she was actually going to kill herself when she said she was going to end her “tenure on earth.”

#PressPlay #AzealiaBanks has a message for all the blogs who reported on her suicidal messages that raised concerns. Thoughts? ??

And this, ladies and gentlemen, is exactly why Azealia Banks is problematic.

Here’s hoping she gets the help she needs.