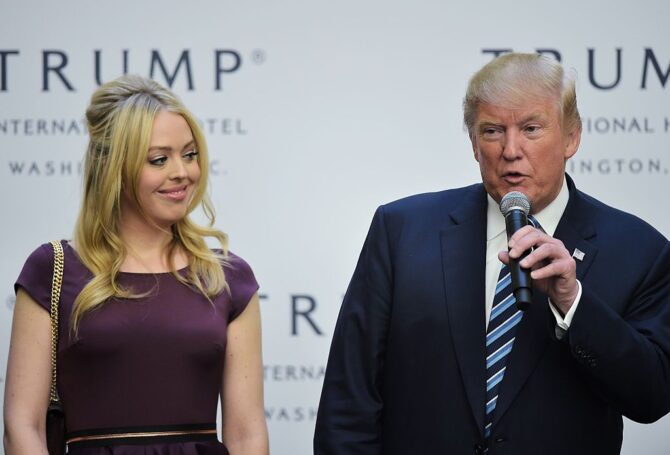 For the first time in perhaps forever, it’s a great day to be Tiffany Trump!

The suit accuses the Trump family business of “grossly” inflating the ex-president’s net worth by billions–yes, billions–of dollars and giving false and misleading financial statements to lenders for at least a decade.

“We found that Mr, Trump, his children, and the corporation used more than 200 false asset valuations over a ten-year period,” James, who interviewed more than 65 witnesses, said this morning at a press conference announcing the charges.

Among the allegations made by James are:

“The examples I laid out barely scratch the surface,” James said. “Claiming you have money you do not have does not amount to the art of the deal. It’s the art of the steal.”

The lawsuit seeks a $250 million judgment and to ban any of the Trumps–Donald, Don Jr., Ivanka, or Eric–from leading companies in their home state of New York. James also plans to send her findings to federal prosecutors in Manhattan, who may choose to open a criminal investigation into bank fraud.

Related: Rosie O’Donnell hilariously claps back at TikTok user who accuses her of being mean to Donald Trump

OK, now we know what you’re probably thinking. According to the headline, this is supposed to be an article about Tiffany Trump! So where does she fit into all this?

The answer: She doesn’t!

As the only one of Trump’s adult children who is not employed by her father, lucky Tiffany was conveniently left out of James’ lawsuit. And, honestly, good for her! Sometimes being fourth best has its advantages!

Being ignored by her Dad ended up working out pretty damn well for Tiffany Trump after all. Bless her.

Poor Tiffany Trump. She can't even be let in on the family fraud.

?When asked about Trump Org ?
Tiffany Trump : “I don’t know any of them, I may have seen them around but they aren’t really part of my life” ??? #TrumpIsGoingToJail #TrumpMeltdown

Well. For the first time, EVER, it’s a great day to be Tiffany Trump. pic.twitter.com/unJKQaDg65

Tiffany Trump is Trump’s only adult child to not be charged with fraud. They really do exclude her from everything, don’t they?

Shout out to Tiffany Trump- every single dis for the last several decades must have been worth it on this day. Enjoy your freedom, girl! ?? #trump #LetitiaJames

Raise your hand if you forgot Tiffany Trump even existed until she didn't get named in her family's fraud suit.

Tiffany Trump has got to be the most unbothered person on the planet right now ??

Tiffany Trump is just drinking water and minding her business.

Tiffany trump swinging her door open and asking who the dumb trump is again pic.twitter.com/xYwxOR78mj

The ex-president responded to James’ lawsuit on Truth Social by calling her a “fraud” who has caused “record numbers of people and companies to flee New York.”

“She is a fraud who campaigned on a ‘get Trump’ platform, despite the fact that the city is one of the crime and murder disasters of the world under her watch,” he wrote.