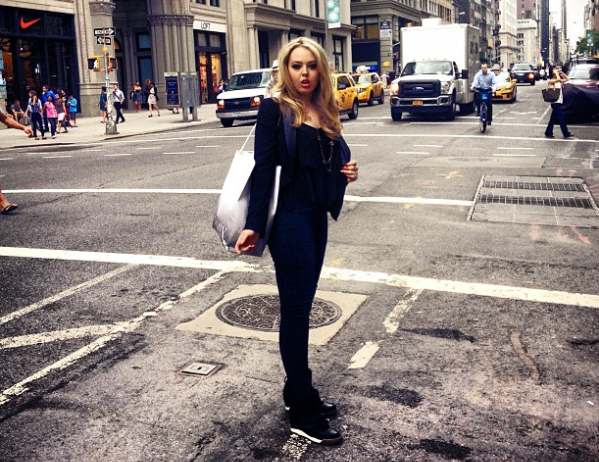 Tiffany Trump may keep a lower profile than some of her siblings, but don’t for a minute think she’s any less precious.

The first daughter was spotted earlier this week in New York City. She was flanked by not one, not two, but three cars packed with Secret Service agents as she bounced in and out of several high end stores doing some spring shopping.

According to the Daily Mail, the 23-year-old pranced around all day in a pair of $560 designer sunglasses while several plainclothes agents accompanied her on foot and three security vehicles remained within close proximity.

The rare sighting comes just a couple of weeks after comedian Wanda Sykes went on “Conan” to ask why the youngest Trump daughter even needs a security detail.

Sykes continued, “She should get a mall cop. She should have a dude on a segway just following her ass around. Trump don’t even like her. He never talks about her–never.”

Indeed, a source close to Tiffany told People recently that she and her father are not close.

“When her dad calls upon her, she always tries to accommodate,” the source explained. “Of course, he hasn’t called upon her that much, but she’s happy to help when he does, like giving the RNC speech.”

The source added that Tiffany did travel quite a bit with her father during the campaign, which she enjoyed, though she doesn’t have any political aspirations of her own.

“That was a really meaningful time for Tiffany because they got some one-on-one time on the private plane. It’s actually some of the only time she’s ever been alone with him as an adult.”

Watch Wanda rant about Tiffany below.