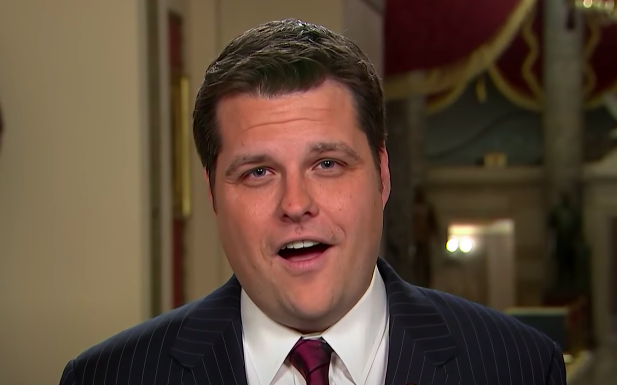 Florida Rep. Matt Gaetz has been in the news a lot this past week.

It all started last Wednesday when he was accused of being racist after he shouted over Democratic Rep. Cedric Richmond, who is Black, during a House Judiciary Committee meeting on racism in America.

In an effort to prove he’s not racist, the 38-year-old bachelor went on Fox News to introduce the world to his beloved 19-year-old “son” Nestor, who is Cuban. There was just one teensy tiny problem: Gaetz was never Nestor’s legal guardian. Nor had he ever mentioned anything about having a “son” before. In fact, in the past, he had always referred to Nestor as a “helper” or a “local student.”

Well, as it turns out, Nestor is actually the little brother of Gaetz’s ex-girlfriend, who he’s maintained a friendly relationship with since they broke up. So, if anything, he’s closer to a step brother than a son. But, hey, if he wants to call him his “son,” that’s his business.

Gaetz, who holds a 0% rating with the Human Rights Campaign and a 100% rating with the antigay hate group Family Research Council, quickly became the laughing stock of the internet, not just for claiming to be the father of an almost-20-year-old nobody previously knew about, but because shortly after that he issued a bizarre statement on Twitter saying he’s “not gay” when someone wished him a happy pride.

Because amid all that foolishness, an old rumor involving Gaetz, his college roommate, and a “gay sex game gone wrong” began recirculating on Twitter.

If you were surprised to learn Matt Gaetz has a son named Nestor, wait until you learn that Gaetz had a college roommate who died under mysterious circumstances.

I’ve been telling y’all about @mattgaetz since he took office. Glad to see everyone is catching up.

Gaetz killed his college roommate during a sex game.

He won’t report this tweet because he really doesn’t want to go through the discovery phase of a legal proceeding.

Matt Gaetz on the other hand…

since he’s is trending, i figure y’all might want to google ‘matt gaetz college roommate’ pic.twitter.com/lMmobvsMU7

We’ll admit, we hadn’t heard this specific rumor about Gaetz before. It sounded crazy, so we did some digging. Here’s what we found out:

It stems from a bogus 2016 report by Wayne Madsen and published on some website called Intrepid Report, which bills itself as a “fearless, feisty and independent” news source.

Without citing any sources, Madsen, who Wikipedia says specializes in propaganda, claimed Gaetz had “at least seven arrests for drunk driving and a reputed alternate gay life style.”

“Gaetz’s roommate at Florida State University was reportedly found dead under suspicious circumstances while they were undergraduate students,” he wrote.

Madsen made no mention of a “gay sex game gone wrong,” but he did say that, as the son of a prominent Florida lawmaker at the time, Gaetz was able to work his connections to have what should have been investigated as a homicide ruled as a suicide instead.

Oh, and while all that was going on, Madsen said Gaetz was also carrying on secret “gay relationship with a well-known pastor of an evangelical mega-church in Fort Walton Beach.”

The fact-checking website Snopes actually dug into the rumors last summer after years of online speculation.

In his report, internet sleuth Alex Kasprak notes that Gaetz doesn’t have seven drunk driving arrests, he has one, and the “suspicious” death of his Florida State University roommate, who may or may not have been gay, has never been confirmed by any reputable sources.

Not only is the suspicious “roommate death” claim flawed, but further doubt is cast on its veracity by the fact that we have been unable to identify any contemporaneous press accounts of suspicious deaths of a Florida State University student who could possibly have been a Gaetz roommate between 1999 and 2003. Though an administrator at Florida State University confirmed to us that roughly 30 students with expected graduations between 1999 and 2003 passed away during that time period, we found nothing publicly suggesting a Gaetz link to any case that received press coverage. As such, we consider the claim without merit.

Kasprak also notes that Madsen has a history of peddling homophobic conspiracy theories online, including one about President Obama having “homosexual trysts” with Massachusetts Governor Deval Patrick and Senate majority leader Bill Frist.

So, just to be super clear, Matt Gaetz did not kill his college roommate during a “gay sex game gone wrong.” He did, however, say he’s “not comfortable” with the “gay lifestyle,” support Trump’s ban on trans people serving in the military, and oppose the LGBT Equality Act.

Related: That time everyone thought Renée Zellweger had married a gay man