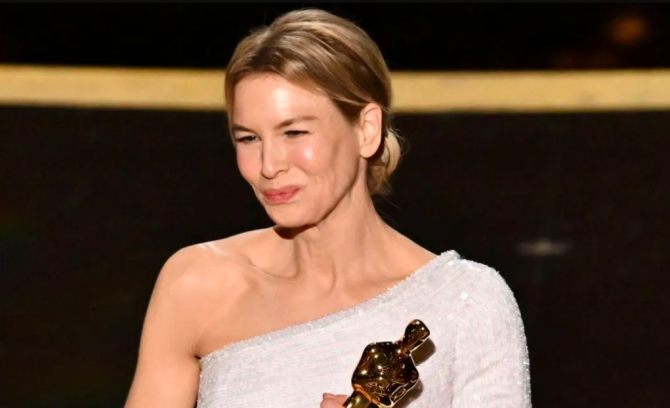 But along with Zellweger’s current renaissance has come a renewed interest in an old scandal: her four-month marriage to country music singer Kenny Chesney that ended with everyone thinking Chesney was maybe probably gay.

The couple eloped in May 2005, just five months after meeting. Four months later, the marriage was annulled, with the actress citing “fraud” as the reason for the breakup.

This led many to believe Chesney was gay, who neither confirmed nor denied the rumors. Two years later, he sat down with Anderson Cooper for a 60 Minutes interview to explain his side of the story.

“Maybe I should’ve come out and said that, ‘No, I’m not.’ But I didn’t want to draw any more attention to it, you know, ’cause I knew I wasn’t … it’s not true, period,” Chesney said.

The singer went on to explain that Zellweger had checked the “fraud” box on the annulment documents because the couple believed it was the “least harmful.”

Turns out, they were wrong. Checking that box ultimately sparked gay rumors that plagued Chesney for years and temporarily derailed his country music career.

“The only fraud that was committed was me thinking that I knew what it was going to be like, that I really understood what it was like to be married, and I really didn’t,” he recalled.

In 2010, Chesney elaborated to Oprah, saying that his busy schedule that contributed to the breakdown of the marriage and adding “that and the fact that I panicked” and that marriage felt outside of his “box.”

“The idea of marriage made me lose my identity,” he recalled. “I just don’t know that I’ve found anybody bigger than that.”

I was really hoping Renee Zellweger would use her Best Actress speech to explain what the "fraud" that led to the annulment of her marriage to Kenny Chesney was ?

Speaking to The Advocate in 2016, Zellweger finally explained the term “fraud” was “simply legal language and not a reflection of Kenny’s character.” She added that the rumors about Kenny’s sexuality made her upset.

“It made me sad that somehow people were using that as a way to be cruel and calling someone gay as a pejorative, which has fateful consequences,” she lamented. “Of course, there’s the bigger-picture problem of why anyone had to make up a story at all.”

Neither Chesney nor Zellweger have ever remarried since their split, though both have seen their careers flourish. Zelleweger became 2020’s Best Actress. Meanwhile, Chesney has gone on to win various CMA and Billboard Music awards as well as five Grammy nominations.