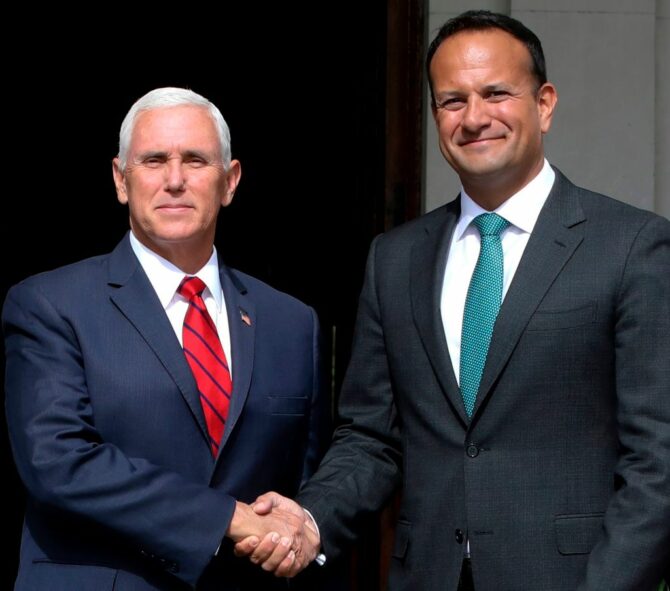 Today has us thinking about Leo Varadkar, the first openly gay prime minister of Ireland and youngest person ever to hold the position.

Around this time of year in 2019, Varadkar managed to humiliate then-Vice President Mike Pence in the most charming way possible: by being himself.

Varadkar was Pence’s guest of honor at a breakfast meeting held at the U.S. Naval Observatory. Nothing out of the ordinary there–each year, Ireland’s Taoiseach presents a shamrock to the U.S. president around St. Patrick’s Day.

The big difference: Varadkar brought his partner, Mike Barrett, to the breakfast with Pence and his wife Karen, who was just in the news for her school’s anti-LGBTQ policies.

During the awkward meetup, Varadkar made a point of shading the Pences–politely, of course!

“I stand here this morning as leader of my country,” he said during his speech, “flawed and human, but judged by my political actions and not by my sexual orientation or my skin tone or my gender or religious beliefs.”

He continued, “And I don’t believe my country is the only one in the world where this story is possible. It is found in every country where freedom and liberty are cherished. We are, after all, all God’s children.”

Afterward, Varadkar said his comments were meant to challenge the homophobic VP and send a message to youth everywhere.

“Part of leadership is really speaking to people in a respectful way and setting an example,” he said. “I hope that any actions I do around equality for any LGBT members of society, and for women as well, gives encouragement to young gay people and young women to believe that anything in life is possible.”

Thanks to the Vice President and his sister for a lovely morning at his home. What a great way to start this St Patrick’s weekend pic.twitter.com/2tzLEOTTpt