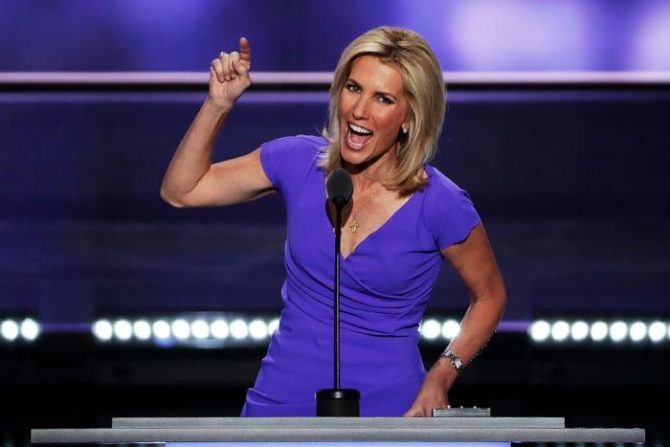 Right-wing radio host Laura Ingraham had a rough time last week, and the forecast for this week isn’t looking much better.

To make a long story short: It all started when 54-year-old Ingraham mocked 17-year-old David Hogg, who has become a outspoken voice in the debate over gun reform, for not getting into the college of his choice.

Hogg responded to Ingraham’s unprovoked slight by calling on his nearly 750K Twitter followers to contact her top advertisers. They did. And within 24 hours, seven of Ingraham’s highest paying advertisers pulled their ads from her show.

In response, Ingraham apologized to Hogg then announced she was taking a one-week “vacation” to celebrate Easter with her kids.

Well, when it rains it pours. Because now an old story involving Ingraham and her treatment of her LGBTQ classmates in college has resurfaced and it has brought with it a fresh wave of outrage.

Basically, while she was studying at Dartmouth in the ’80s, Ingraham was editor of the conservative college newspaper the Dartmouth Review.

At one point during her tenure there, she assigned a reporter to sneak into a meeting for LGBTQ students and then record their conversations. She then published the transcript, outing many of the students to classmates.

Ingraham also allegedly sent tapes of the meetings to the students’ parents.

Related: Laura Ingraham: I Will Always Be Against Gay Marriage

In the article, Ingraham called the LGBTQ group “cheerleaders for latent campus sodomites” and later defended the outings as a “freedom of the press issue” then tried saying the purpose of the article was to question the school’s funding for the program.

“The big thing is what does this organization do with its money?” Ingraham said at the time. “It seems like they just have parties and talk about parties. There isn’t a heterosexual group that gets funding.”

When asked about Ingraham’s nasty tweet and insincere apology to him last week, Hogg told CNN over the weekend:

“It’s disturbing to know that somebody can bully so many people and just get away with it, especially to the level that she did. No matter who somebody is, no matter how big or powerful they may seem, a bully is a bully and it’s important that you stand up to them.”