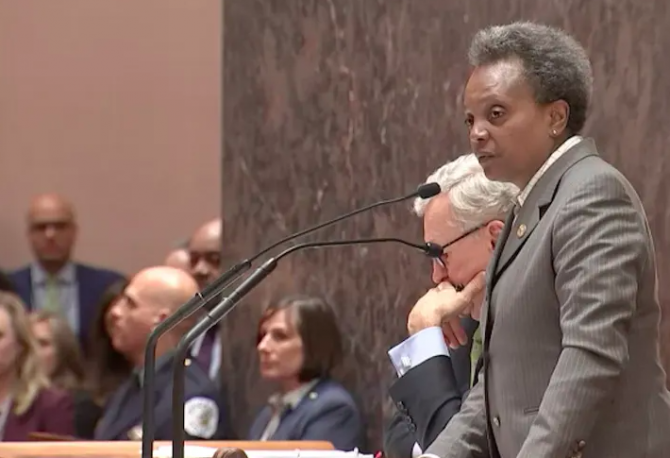 Chicago’s mayor Lori Lightfoot has been kicking ass lately. When she’s not saying “f*ck you” to Donald Trump during televised press conferences, she’s vowing to identify and strip homophobic cops of their badges.

Earlier this year, she called out citizens and members of Chicago’s City Council for their antigay microaggressions during a community meeting. The impromptu speech made headlines back in January and has been recirculating in recent days because of its powerful pride message.

A little backstory: At the time, the City Council was debating whether to set aside contracts specifically for LGBTQ-owned businesses as it does for other minority- and women-owned businesses. After several people made blatantly homophobic remarks during the public comments, Lightfoot finally stood up to share her thoughts.

Lightfoot, who is the city’s first Black female mayor and first lesbian mayor, continued, “My friends, the pie is big enough to slice it in lots of other ways. … We need not victimize, demonize, and discriminate through our words against anyone else because we are worried about what the size of the pie is going to be for me.”

“When I was coming out in my 20s, similarly I was worried about how I would be perceived, and I let people say terrible things about gays and lesbians in my presence and I was silent,” she added. “I will be silent no more on any issue. When people say and do things that are offensive and racist, I feel I have an obligation to speak, and so I am.”

In the end, the City Council approved the move forward with the proposal by a vote of 47-1.

‘The pie is big enough to slice it in lots of others ways.’ — Chicago Mayor Lori Lightfoot said she was disturbed by her City Council’s debate on an LGBTQ+ business initiative