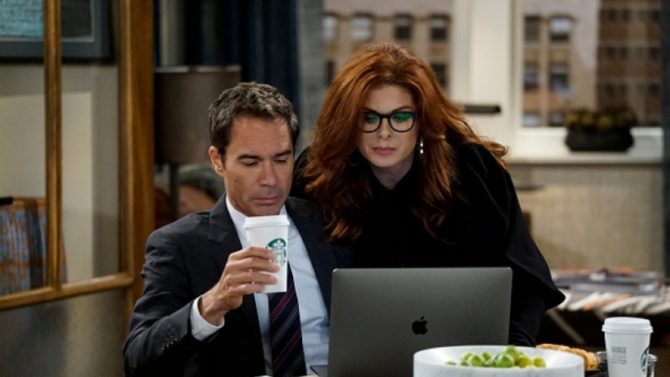 The much-hyped return of Will & Grace has finally arrived, and the gang is zippier and zappier than ever.

In line with the 10-minute short produced last year, the new Will & Grace dives headfirst into politics, and we’re curious to see if they stick with this formula moving forward. It’s already been established that Karen and the first lady regularly chat on the phone, so expect some grade-A Melania zingers on a weekly basis.

But we’re burying the lede; typical.

We won’t be revealing any other spoilers, expect we’d be remiss not to mention that Queerty — yes this very Queerty — gets mentioned by one of the main characters.

Here is actual security camera footage from the Queerty offices when this historic event transpired:

The initial surprise wore off and for a few brief moments, we were stunned. “What does it all mean?” we openly pondered.

Was it real? What is real for that matter?

Jean-Paul Sartre wrote that “one is still what one is going to cease to be and already what one is going to become. One lives one’s death, one dies one’s life.” Had our mention on Will & Grace always existed, and were we simply living out the experience aboard some grand, poetic time loop?

Does this mean we’re dead?

Then we snapped back to our senses and danced. A “woo” may or may not have been uttered.

We can only assume this means Queerty will become a pivotal plot point in the coming season. It’s the only logical conclusion.

Will & Grace airs Thursday nights at 9pm on NBC.