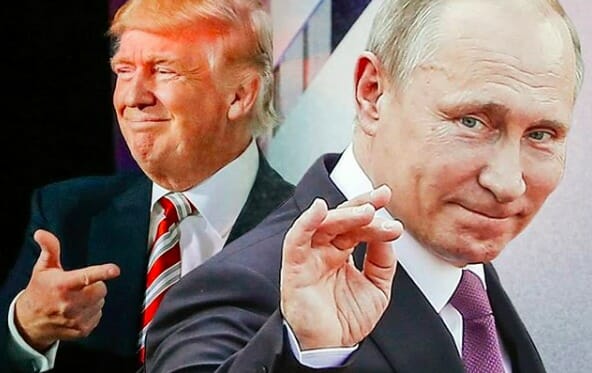 As the world watches the real-life farce of Donald Trump‘s Helsinki summit backpedaling play out, it’s becoming impossible not to see a connection between the President and his Russian counterpart, Vladimir Putin. Even Fox News has boarded the train.

Of course, to anyone who’s been paying attention the last year (and beyond), this is hardly new information.

Do you think Putin will be going to The Miss Universe Pageant in November in Moscow – if so, will he become my new best friend?

Related: These hilarious Trump “I misspoke” memes speak for themselves

The newest cover of TIME Magazine takes the premise and combines the two presidents, delivering unto the world a man we wouldn’t want to serve a cappuccino to, let alone encounter in any dark alleyways:

She said her goal for the project was to get people to “stop and think” about the similarities between the men.

“What my work has always been about is allowing people to see differently,” she said. “The combining of faces is a different way for people to see what they couldn’t see before.”

“A year and a half into his presidency, Trump’s puzzling affinity for Putin has yet to be explained. Trump is bruised by the idea that Russian election meddling taints his victory, those close to him say, and can’t concede the fact that Russia did try to interfere in the election, regardless of whether it impacted the outcome. He views this problem entirely through a political lens, these people say, unable or unwilling to differentiate between the question of whether his campaign colluded with Russia—which he denies—and the question of whether Russia attempted to influence the election.”