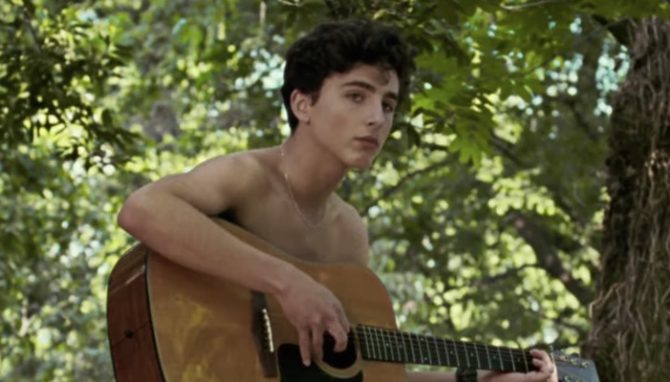 Despite being straight (as far as we know), Timothée Chalamet has exuded twink energy even before he starred in the big-screen gay love story Call Me By Your Name. Depending on which Twitter user you ask, Chalamet “invented being a twink,” he’s “everyone’s twink crush Tuesday,” he “created twink rights,” or he’s “twink Christian Bale.”

And during a press junket for Chalamet’s new film, Little Women, an interviewer from Out magazine asked him point-blank, “How does it feel to be the straight prince of twinks and to be so beloved by the queer community?”

Laughing, the 23-year-old responded, “Oh, my gosh, I want to give a serious answer or something like that, but what a good fortune.”

“I stumbled into Call Me by Your Name,” he added. “That book inspired me, and that director inspired me, and I hoped the fans of the book would see it, basically.” He’s also glad he could “present a version of love that people don’t understand to be niche… that isn’t prosecuted or persecuted, that it’s just a thing.”

He went on: “I’m f*cking pinching myself, really. ‘Cause that is the humble definition of an actor: [It’s] to be in service to the production, to the story, to the director. So I’m getting to do it, but then I’m also getting the assurance or whatever, whatever that people are affected by.”

Related: Twitter is coming up with hilarious names for the ‘Call Me By Your Name’ sequel

Chalamet explained that the “greatest thing” about Call Me By Your Name is that people still come up to him to this day and express their appreciation for the Oscar-nominated movie. “And it can be no words,” he said. “It can be a silent communication, which can happen in the street, and it’s the coolest thing.”

“Or maybe it’s not necessarily about that movie,” he quipped, referencing the interviewer’s original question. “How would I know?”