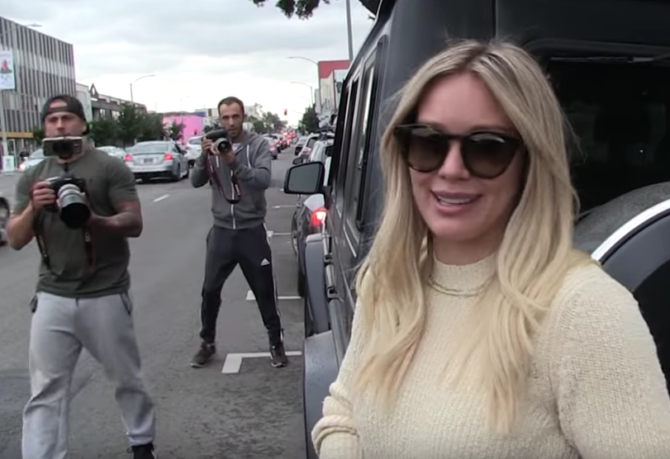 TMZ has busted open the story of the century, and it all happened outside the Vivianne Westwood on Melrose Ave. in Los Angeles.

Hilary Duff, best known for her game-changing TED Talks, her 2009 Nobel Peace Prize, and to a lesser degree the 2001-2004 Disney Channel show Lizzie McGuire, was getting some clothing alterations done at a nearby shop when everything. Suddenly. Changed.

A group of men all pointing cameras directly at her (women just love that) throw a softball question her way — “What are you doing?” — or something like it, it’s pretty unintelligible.

Smiling and clearly used to putting up with basically being followed by career stalkers, Hilary answers, “Oh, you know. Just getting some alterations done.”

Then the gloves come off.

“So the Power Rangers movie’s coming out and Becky G’s playing the first LGBT superhero, what do you think about that?”

“That’s awesome, I love that!” she says, still maintaining what must at this point be a fake smile.

“So what do you think that’s going to do for the LGBT community?” asks the TMZ cameraman/heckler.

“I hope bring more awareness and attention. It seems like we’re pushing forward in a good direction for everybody to have the rights that they deserve,” she says before getting into her car and going about her damn day.

“Thank you so much!” calls the cameraman.

Now lets see how this exchange played on TMZ’s website, starting with the clunky headline:

Followed by this tireless reporting:

Hilary Duff thinks it’s great there’s a gay character in the new “Power Rangers” movie … but when asked to elaborate on its meaning, she resorted to talking points.

We got Hilary on Melrose Ave. Tuesday, and she seemed genuinely surprised that Becky G’s playing what appears to be the first openly gay superhero on the big screen.

But watch what happens when she’s pressed as to what it means for the LGBT community. Hilary reaches deep for wisdom … and pulls out a pretty kosher answer.

SO, Hilary’s answer (outside her car, while she’s running errands) about the impact of a gay Power Ranger on the LGBT community wasn’t up to the high standards of the TMZ editorial bar.

Perhaps instead of picking apart Duff’s completely reasonable roadside response, they could use some of their investigative powers to look into why their own company’s founder, Harvey Levin, met privately with Donald Trump for an hour in the Oval Office earlier this month.

Levin, who is an out gay man, hosted a Fox News special just after the election in November called “OBJECTified: Donald Trump,” which Trump himself appeared on.

In her review of Trump’s “OBJECTified” appearance for Variety, TV critic Sonia Saraiya wrote, “It’s a stellar example of the kind of television you can make if you have zero interest in journalistic standards and pay no attention to quality.”