For as long as we can remember, there have been rumors. Whispers. Conspiracy theories — and theorists — have followed megastar Tom Cruise throughout much of his career, no matter how hard he’s tried to tamp down the stories, ignore them, or shuttle them into Xenu’s glowing orange belly.

Almost all these rumors revolve around whether or not Dat Ass is real.

Let’s now go back to the halcyon days of 2008, in which Cruise exposed what looked like a perfect “bubble butt” in the film Valkyrie.

It’s a four-second scene which, thanks to the power of the gif, you can now watch until eternity explodes. We did that for you.

For years, viewers have felt Cruise’s ass was simply “too perfect.”

Some folks have even suggested Cruise called up Viv in Wardrobe and had her cobble together prosthetic cheeks for the scene: 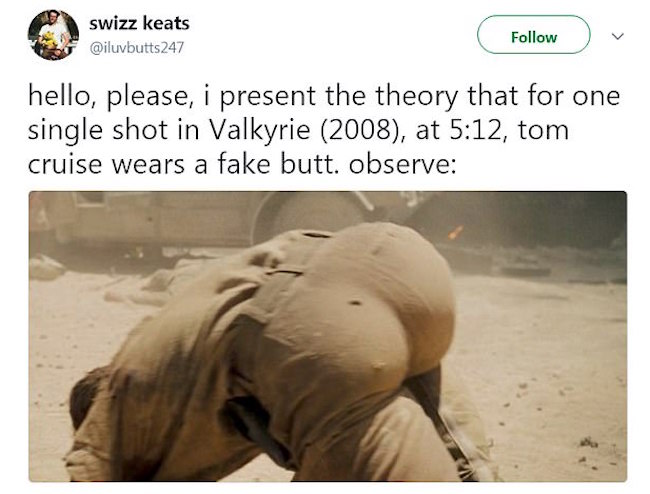 Well, Tom Cruise has finally acknowledged these rumors, and he has news for all you doubters out there.

Asked in an interview about the theories — which Cruise admits he’d never heard — the 55-year-old sets the record straight:

“There was no prosthetic in Valkyrie,” he says. “No.”

In his upcoming film American Made, Cruise’s character apparently moons his family repeatedly.  And that’s allegedly all him, too.

So there you have it — case closed.

But just to be on the safe side, let’s look at that scene from Valkyrie one last time — in slow-mo: