Bio: Dorfman is an actor best known for her role as Ryan Shaver in the first two seasons of the Netflix teen drama 13 Reasons Why. She also starred in the Freeform series Love in the Time of Corona and guest-starred on the TV shows Insatiable, Jane the Virgin, and Love, Victor. Off-Broadway, she performed in the Jeremy O. Harris play Daddy in 2019.

Coming out: Dorfman’s profile in the pages of TIME this July was less coming-out and more clarification. “It’s funny to think about coming out, because I haven’t gone anywhere,” she said. “I view today as a reintroduction to me as a woman, having made a transition medically.”

She went on: “Coming out is always viewed as this grand reveal, but I was never not out. Today is about clarity: I am a trans woman. My pronouns are she/her. My name is Tommy.” 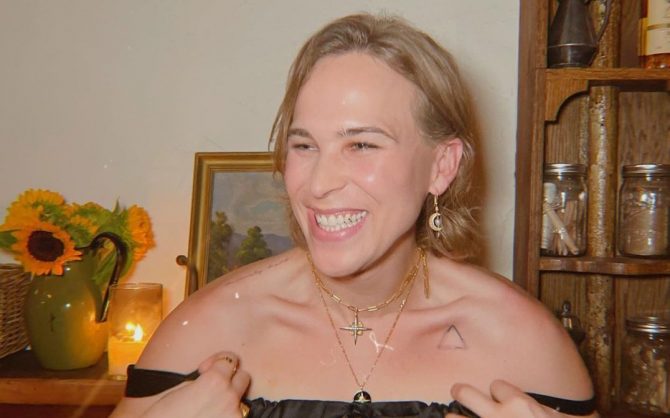 Chosen family: A week after the TIME reveal, Dorfman sat down for a cover story with InStyle and detailed how trans generations are “a little different” as she praised her trans elders.

“I think trans generations are a little different because it’s about when you start transitioning. Whoever your contemporaries are — whether it’s someone in their 50s, someone in their 20s, someone in their teens — those are the people born in your year, in a way,” she said. “Some trans elders are younger than me because they’ve been living in a trans body for 10 to 15 years. It’s sort of like how someone had to teach you the ropes of working in fashion, or how in most traditional family structures, cis mothers teach cis daughters how to be women in this world. It’s very much a mother-daughter type of relationship.”

Dorfman also said that during her days “walking in the privilege of a male body,” she always knew she was a woman, and sometimes other people did, too. “Trans women would clock me all the time and be like, ‘Hey, girl, what’s up?’” she said. “Because it’s sort of a thing you recognize. … It’s a thing you recognize in other women in a weird way, and I’ve done it to other people, as well. It’s kind of unexplainable — trans people are magic at the end of the day.”