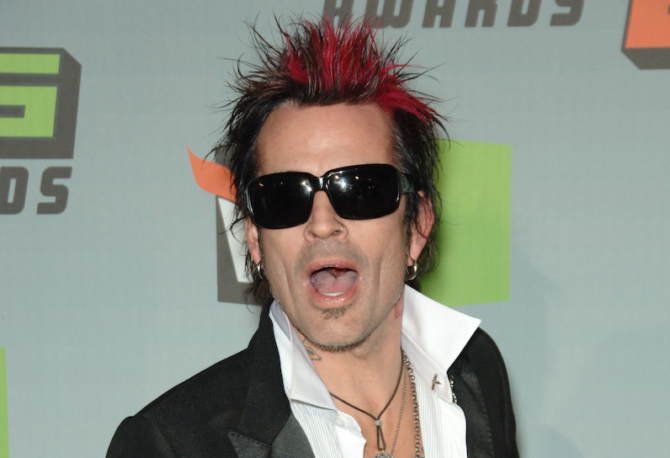 Tommy Lee gave his 1.5 million Instagram followers quite the eyeful when he said “to hell with the rules” and posted a full-frontal selfie Thursday.

The photo, which features the drummer wearing nothing but jewelry, remained up for over five hours and is now making the rounds on Twitter (link work-unfriendly).

Lee captioned the photo “Ooooopppsss,” and it garnered over 50,000 likes and thousands of comments before it was ultimately taken down. It’s not clear if Lee or the app removed the post.

Among the comments was one from Grindr, which posted, “Wrong app, babe.” Lee’s wife, Brittany Furlan, went with a subtle “OH MY GOD.”

Lee’s endowment re-entered the zeitgeist earlier this year via the Hulu series Pam & Tommy, which told the story of Lee’s infamous sex tape with ex-wife Pamela Anderson. In one scene, Lee (Sebastian Stan) converses with his penis, which was voiced by Jason Mantzoukas.

The musician followed up the post by sharing an image of a nude man standing in front of an elephant with the text: “How do you breathe through that little thing??”

He also posted a photo of a banana on a Buddha statue along with the caption: “Twinning”. Hilarious.

While many commenters had fun with the revealing post, others were quick to call out a double standard.

Could you imagine the stark difference in replies if, say, a fellow female musician decided to share a vulva photo? Look at how Kourtney Kardashian was shamed for posting a semi-nude image, with trolls more than happily letting her know they found it unacceptable for her to strip off as a mother (Tommy Lee is a father of two, by the way). Ditto Britney Spears, who has been cruelly ‘called out’ for her naked posts.

We’ve also reported on Instagram users getting banned altogether for posting less explicit content, but the rules are likely different if you’re a vaguely household name.

it’s kinda fucked that tommy lee can post full dong on ig for hours before it’s removed with no repercussions but sex workers who rely on the bag are shadowbanned or have their accounts nuked for posting anything remotely lewd.

Sorry for everyone who follows tommy lee on instagram, heres a wholesome doggo to cleanse your eyes pic.twitter.com/ZXnXvl9n2f

tommy lee getting his chopper out on IG wasn’t on the 2022 bingo card, but here we are

everyone who opens instagram at 3am and follows tommy lee pic.twitter.com/BLk0k8sh3Z

If I had a nickel for every time in my life the world went nuts over tommy lee's hog, I'd have two nickels. Which isn't a lot but it's weird that it's happened twice.