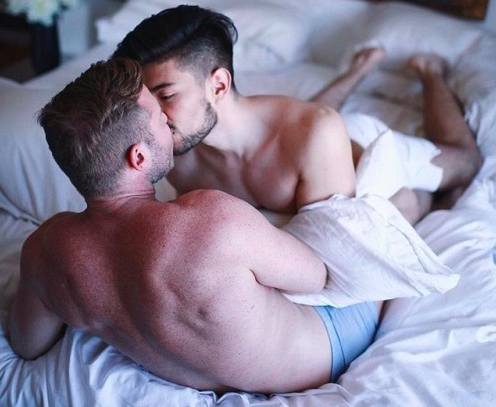 My name is Jeremy, and I’m a… Well, I’m not exactly a “top,” although if things go there, that’s where you’ll find me. And I’m not a “bottom,” but only because the one time I tried, when I was 22, it hurt so bad that I swore, “Never again!”

A higher threshold for pain might make me “versatile,” but frankly, if I could get away with it, I’d spend most of the rest of my sex life just making out and cuddling. Maybe it’s my aging libido or my rising frustration when a perfectly enjoyable kissing session is cut short by an overzealous guy reaching for my crotch.

It’s not that I don’t enjoy getting busy in the nude, but as ’90s pop and R&B superstar Monica once sang: “I want to get down, but not the first night.” And then, can we get a little more foreplay up in here and not immediately reach for the condoms?

Or leave them out completely. I’m not promoting unsafe sex. I’m just saying that sex without penetration can rock just as hard. I prefer it, but based on evidence I’ve collected in bed over the years, I’m in the minority.

Unfortunately, that particular predilection often dims future prospects with guys who leave my bed smiling on the outside but disappointed on the inside–or ones who lose interest the moment I own it. I could swear some of them are thinking, If you’re not going to top me or bottom for me, you’re nothing.

“So what else is there to do then?”

We’d done so much more that night and every night since we’d met several days earlier at a beach bar in Rio. Now he was saying that getting topped was the only part of it that really mattered.

I’ve had awkward moments with tops, too. Some have tried to pressure me into letting them in, much like the one who convinced me to when I was 22. Years later, I had a fantastic time in bed with a self-described top I met at Wonder Bar in New York City who didn’t apply any pressure at all. But the morning after, he made an announcement.

With the ascent of online dating, for many, we’ve ceased being individuals, and we’re now just whatever category fits. I’m alternately “a top,” “a black top,” or “a big black top” to some guys who don’t bother to ask my name.

Our insistence on defining ourselves and others as “tops” and “bottoms” has spawned something called “top privilege,” which I recently read about for the first time. Despite the symbiosis between tops and bottoms, there’s apparently a lot of resentment and outright animosity. Are they sometimes actually having hate sex?

Related: “Top privilege” is a problem and it needs to be addressed

According to “top privilege,” many who identify as bottoms believe they do all the work (the prep work is a little mind-blowing), as if those who identify as tops can get strong, enduring hard-ons just because the other guy shows up. They also feel some tops treat bottoms like second-class gays.

Personally, I have nothing but respect for anyone who can take it like a man?—?yes, like a man. But the more I think about “top privilege,” and the more I hold it up to “white/male/straight privilege,” forerunners that no doubt inspired the concept, the more trivial it seems. In this PC age where we are constantly coming up with new terms to label the ways in which we make each other feel small, can there actually be “privilege” if a community is open to everyone?

Can we legitimately use them to victimize one group and demonize another in the same vein? What a lovely gay world it would be if we didn’t divide and limit ourselves by obsessing over labels in the first place. Think of all the potential Mr. Rights we wouldn’t miss out on just because they checked a certain box on Grindr.

There’s so much more to great sex, and anyone who thinks there isn’t hasn’t been doing it right.

Related: Is it time to abandon the top and bottom labels once and for all?