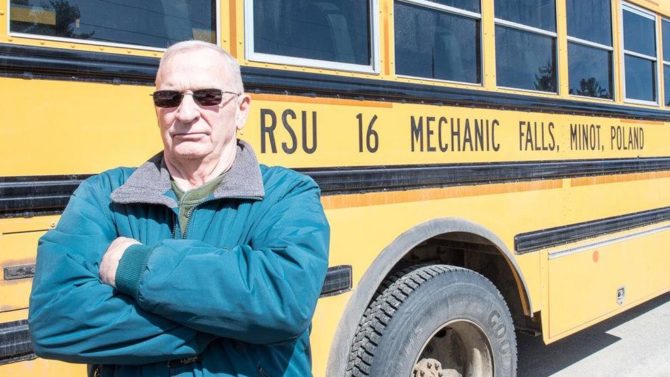 A school bus driver from Maine who was fired earlier this year for making racist, sexist, and homophobic comments at work was just elected to the board of the school system that let him go.

Mike Downing admits that he may have made some inappropriate remarks over the years at work, but they really weren’t that bad.

Some of the alleged remarks include using gay slurs while railing against gay marriage, calling Martin Luther King Jr. Day “National N*gger Day,” and calling his female superior a “c*nt.”

He was also accused of calling a male student a “moron” and admits to referring to an African American student as a “Negro girl.”

“The principal (later) said that I called him a moron,” Downing tells the Press Herald. “I don’t know if I did or not.”

In January, he was finally fired from his job, after 45 years with the school system.

“I just don’t think the punishment fit the crime,” he says.

So in retaliation, he decided to run for the school board. This month, he was elected to represent Minot on the RSU 16 school board as a write-in candidate. He won by 31 votes.

Downing will now oversee the school system he is considering suing for wrongful termination, as well as the superintendent who fired him for being a racist, sexist homophobe, Tina Meserve.

Meserve also happens to be the same superintendent who Downing regularly referred to as the c-word.

Speaking of the superintendent, Downing says, “I don’t mind telling you, when I first decided to (serve on the board), I said, ‘Well, you know, if she gives me a hard time, I’m just going to remind her you used to be my boss and now I’m yours.'”

Downing now hopes to clean up the district, which he calls a “dirty pool.”

As for his years and years of terrible language, Downing thinks it’s fine for people of his generation to speak that way.

He adds, “Nobody is ever going to convince me that was wrong,” referring to his use of the word “Negro.”

Meserve has declined to comment on Downing’s election victory. The 68-year-old fired bus driver will begin his three-year term on July 1.