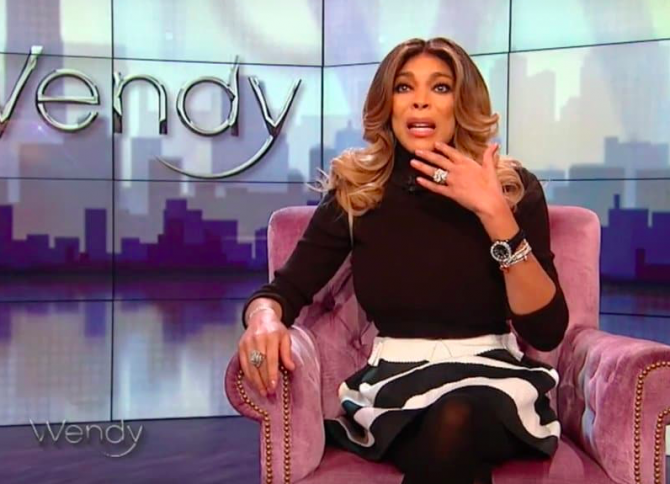 How does Wendy Williams annoy me? Let me count the ways. First, we can start with her bread and butter: passing judgment on dumb celebrities when her house is made of shattered glass. But everyone already calls her out on that.

The thing no one ever really calls her out on, though, is her tacit endorsement of toxic masculinity. Not to pass judgment on her the way she so gleefully does on everyone else, but it’s probably the reason why she spent so many years married to an allegedly typical toxic male. Her estranged unfaithful husband Kevin Hunter must have ticked all of the right “masculine” boxes for her.

Williams has made it crystal clear that her ideal type is a man’s man — someone who can love her, protect her, and, most importantly, dominate her … at least in size, because, well, it matters. Just in case the black women and gay men who make up the bulk of her audience didn’t get that from watching her show, she gave her gender specifics extra transparency in a recent episode where she discussed People magazine’s latest Sexiest Man Alive: John Legend.

Having toiled at People as a reporter and writer for most of the ’90s, I know firsthand the mathematics the editors apply in choosing a Sexiest Man Alive. That’s why I was surprised by the choice of John Legend. My first thought was this: His wife is funny, beautiful, and very quotable on social media, but can a solo Legend on the cover sell magazines? Do white mainstreamers really know him?

Wendy, however, questioned People’s choice for an entirely different reason during a recent “Hot Topics” segment of her talk show.

“When I think about a sexy man, I’m not thinking John Legend,” she said. “The first thing I think of is that I weigh so much more than him, and if we were walking down the street and somebody wanted to spray me with a water gun, I need a man who’s gonna punch someone in the face.”

Her pick for Sexiest Man Alive: Aquaman star Jason Momoa. I was inclined to agree until Wendy spilled the reason for her preference: “If, you know, I’m not quite feeling right after leaving the club, I need a man to throw me over his shoulder and say, ‘Come on girl — we’re going.’ John is not that guy.”

Enter Jason … or some superhero with enough muscle to lift Wendy off the ground. Clearly, “twinks” need not apply. Seriously, though, has there ever been a Sexiest Man Alive who looks capable of throwing Wendy Williams over his shoulder?

Her reasoning was such a thinly veiled – no, ringing  —  endorsement of toxic masculinity. Isn’t the guy she was describing also likely the one who is tough enough to physically intimidate a woman if necessary? Doesn’t he sound a bit like the bad guy women insist is the bane of womanhood, though, ultimately, what a girl wants, what she really really wants?

This brand of, well, toxic femininity is an insult not only to straight men who don’t fit the hyper-masculine mold — men like the one an entire episode of Sex and the City ridiculed (the one where Charlotte dated a man she decided had to be gay when he didn’t rescue her from a mouse) – are deemed too effeminate … or totally gay.

I just watched an episode of a show called Dollface on Hulu where one female character actually said to another: “If he doesn’t like you, he must be gay.” It wasn’t the comment that shocked me, but the fact that in this age of #MeToo, Time’s Up, and #BlackLivesMatter, a television script could still get away with such a thing. But then, LGBTQ always has ranked well under women and blacks in the hierarchy of beneficiaries of political correctness.

That’s why Ohio U.S. Senate candidate Melissa Acklson can call her opponent “a limp-wrist, weak-knee RINO”  —  implying what, I don’t know  —  and act defiant when the community calls her out on it. “I SAID what I SAID,” she tweeted, in response to the uproar. She knows the ramifications won’t be as brutal as they would have been if she had compared a black woman to an ape.

What ladies who promote crusty masculine stereotypes don’t realize is that they are doing as much damage to men who don’t live up to them as guys do to women when they treat them like second-class human beings because they aren’t sexy enough, because their breasts are too small, because they’re not men. When a rapper like Nicki Minaj roasts frock-wearing rapper Young Thug on her song “Barbie Dreams,” she’s not just dissing Young Thug. She’s insulting all of us who don’t conform to the traditional standards of manhood.

Many gay man have been hearing the “limp-wristed” and “sissy” slurs our entire lives, and when women casually toss them off, it’s as denigrating as when men talk to their breasts instead of to their faces. By complaining about aggressively flirty men in one breath and downgrading those who aren’t attracted to them as “gay” in another, they set up a confusing double standard: Don’t act like you want me, but if you don’t want me, then you must be gay.

The suggestion: You’re not a real man, so you don’t really count. Wendy Williams wasn’t saying that exactly, but by declaring that sexy is being bigger than her and being able to kick the butt of anyone who dares to mess with her, she was implying that any other kind of man is somehow lesser, not worthy of “sexy.” No-one calls her out on Twitter, though, because that’s actually the way more women than probably would like to admit it feel.

It’s part of our ancient tradition: the damsel in distress and the charming prince who rescues her. If sisters really are doing it for themselves, though, isn’t it time for them to let go of some of those creaky expectations that continue to hold back both them and us?