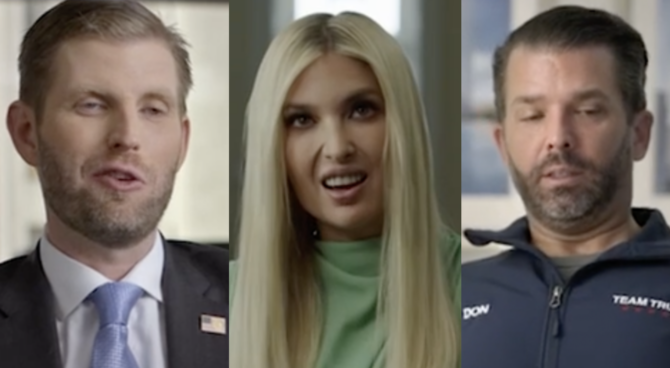 The trailer for British documentarian Alex Holder’s Unprecedented has just hit the internet and… UUUGGGHHH.

The three-part docuseries, which hits Discovery+ later this summer, details the final days of Donald Trump‘s presidency, from his doomed 2020 presidential campaign to shortly after the deadly January 6 attack on the U.S. Capitol.

The two-and-a-half-minute trailer was obtained by Politico and doesn’t reveal too much except how much access Holder had to the Trump klan during the lead up to the insurrection, including sit-downs with Trump, Don Jr., Eric, Ivanka, and Jared.

Ivanka frets about a line on her dress, and jokes about covering it with a pet roaming about. “Can I borrow your dog?” she asks her makeup artist. Kushner nervously repositions his tie and asks “Is that OK?” Don Jr., seen at a rally, screams, “We will make liberals cry again!” Eric is caught on a phone call, mysteriously saying, “For the sake of this country, we’re going to get these guys.”

The quick cuts are set to Vivaldi and interspersed with a series of text-only shots explaining the movie: “Witness the 3-part documentary event … With exclusive access … To the most controversial family in the world … Gaining power is easy … Surrendering it is not.”

It all builds to Jan. 6, when the Vivaldi suddenly stops and a wide shot of Trump at the “Stop the Steal” rally in Washington appears. “Let’s all walk down Pennsylvania Avenue,” he tells the crowd.

Then Holder’s cameraperson joined the crowd as it marched on the Capitol.

The House committee investigating January 6 obtained hours of footage from Holder, who testified before the panel behind closed doors on June 23.

Related: It sure looks like Ivanka lied in her testimony to the January 6 committee

In a statement last month, the documentarian said, “When we began this project in September 2020, we could have never predicted that our work would one day be subpoenaed by Congress.”

“As a British filmmaker, I had no agenda coming into this. We simply wanted to better understand who the Trumps were and what motivated them to hold onto power so desperately. We have dutifully handed over all the materials the Committee has asked for and we are fully cooperating.”

Trump and his family have remained tight-lipped about the docuseries, though New York Times senior political correspondent Maggie Haberman says they are very anxious about it.

“My understanding is that there is some anxiety among some family members about what might have been said,” she tells CNN. “Again, not necessarily for legal reasons, but just because there are things… which are at odds with other statements that have been made.”

Trump’s former senior advisor, Jason Miller, however, isn’t holding back. This morning he took to Twitter at 5:30 a.m. to call the whole thing a “farce.”

“This is it??? All the drama and bluster surrounding the Alex Holder ‘documentary’ and the J6 Committee, and this is it???” Miller, who appeared before the January 6 committee via a taped deposition, tweeted. “What a farce.”

This is it??? All the drama and bluster surrounding the Alex Holder “documentary” and the J6 Committee, and this is it???