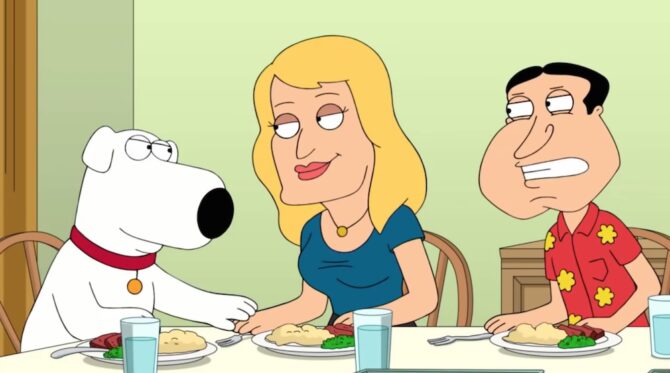 Twelve years later, Seth MacFarlane is reflecting on “Quagmire’s Dad,” the 2010 Family Guy episode in which Quagmire’s war-hero parent comes out to him as a transgender woman named Ida. When it first aired, “Quagmire’s Dad” drew the ire of Queerty, GLAAD, and other LGBT groups for its portrayal of Ida, including a scene in which Brian vomits after hearing that Ida, with whom he’d had sex, is trans. The episode also bears a joke that equates trans people to sex offenders. (For more about Hollywood’s reprehensible history of trans portrayals, check out the Netflix documentary Disclosure.)

In a new interview with The Hollywood Reporter, MacFarlane, creator of the animated Fox sitcom, says there “isn’t a big change” he’d make in that episode, but he would change some jokes in the script.

“Look, there are always things that you would do differently when you look back at earlier points in your career,” he says. “For me, it’s more about nuance. There isn’t a big change I would make. It’s more about individual moments and individual jokes. The intent of the Family Guy episode was to show that Quagmire’s father was still a war hero, and still someone that he could look up to and respect.”

MacFarlane also reveals a Family Guy writer’s experience informed the storyline. “Actually, that episode was written by Steve Callaghan, a writer on Family Guy, who had the same experience with his own parent—his father had transitioned to a woman—and he was writing, in many ways, from his own experience.” (Note: Callaghan actually isn’t one of the writers credited for the episode.)

Related: ‘Family Guy’ vows to quit with the gay jokes

On his latest show, the Fox-turned-Hulu sci-fi comedy The Orville, MacFarlane is overseeing a respectful trans story, with one alien character sharing in a recent episode that she identifies as female.

“It seems the most organic way to let her story play out, and when I was writing the draft, I found that it was not a simple thing to do, but breezy enough process that it was a good indicator that we were on the right track,” MacFarlane tells THR. “This episode was a pleasure to write because when I got into it, all indications were that the story had been broken properly and responsibly and with care. … I’ve been really gratified by the reaction from the fans. They’ve really taken it as a conversation starter. … People have taken it as a character story that is allegorical—it takes place in this alien world—but is also the impetus of a much more human conversation.”

what a d*ck
9 comments