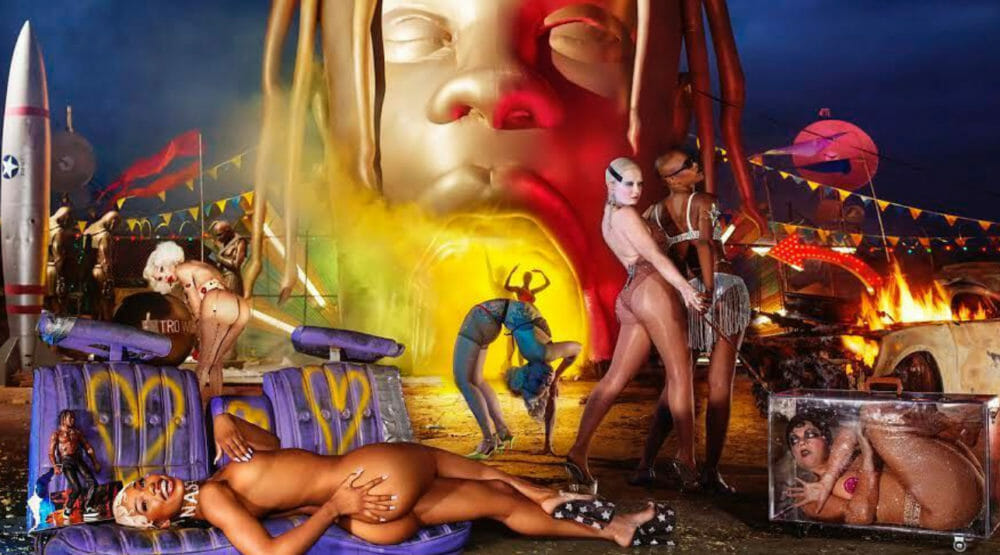 Travis Scott shared the image for his upcoming album Astroworld, set for release this Friday. But one person is missing: trans icon Amanda Lepore.

Travis Scott is a rapper and producer originally from Houston, Texas. He began his music career as a record producer at age 16. He is known not only for his music, but also for dating Kylie Jenner, the daughter of Caitlyn Jenner.

Photographer David LaChappelle, who shot the image for Scott’s new album, shared his version on Instagram, and in the back Lepore can be seen showing off her assets. But when Scott shared the image on his Instagram, Lepore was nowhere to be seen.

Lepore herself is outright confused. She shared on Instagram Wednesday morning, “It was great being part of @david_lachapelle s incredible photograph of @travisscott s albulm cover but I’m curious why I’m not on the picture @travisscott posted ??? #amandalepore #glamourgirl #whatsgoingon #theT”

Fans have flooded Scott’s Instagram, asking where Lepore is.

One writes, “It’s honestly really sad to see that someone with so much impact could’ve started a conversation and made some actual change but instead they decide to be transphobic and not make change. This is why the government is the way it is. I don’t care what anyone says, it’s transphobia. Because you are a beautiful trans woman that was the only one completely removed from this photo. Maybe if you were kept on it, I probably would’ve went out and bought the album, but now I won’t be.”

Another adds, “Ashamed at you for standing by and letting this flagrant and ignorant oversight to exclude one particular woman in what is ultimately YOUR visual and artistic representation. you want to stand up for the freaks in the world? there went your chance, you’re just another trash male artist.”

Queerty reached out to LaChapelle and Lepore, who have a long-standing artistic relationship, for comment on this. We will update this post if they get back to us.