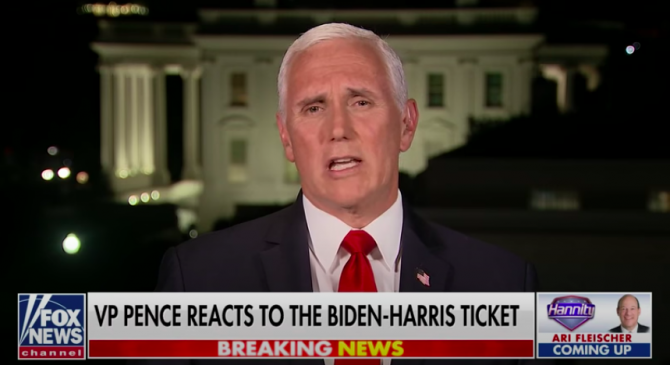 If there is one thing nobody wants to do, it’s debate Democratic vice presidential candidate Kamala Harris. She’ll eviscerate you. But on Wednesday, October 7, that’s exactly what Mike Pence is gonna have to do.

In an interview with Sean Hannity last night, the current VP swears he’s not nervous at all about facing off with the woman who may very likely be replacing him come January. No seriously! He’s not worried at all, you guys. Like, for real. It’s NBD.

“I just have to tell you, I like the matchup,” Pence said with a pained expression on his face. “It’s on, Sean.”

Later in the interview, Pence said he thinks Harris is a “skilled debater” and he “can’t wait to get to Salt Lake City” to talk about “the agenda of the radical left, the agenda that she’s embraced throughout her political career.”

He also said he can’t wait to get back out on the campaign trail to talk with voters about what a great job Donald Trump has done handling the coronavirus.

“I can’t wait to get back out there,” Pence said. “I’ll be in Iowa tomorrow telling the story of what this president has done, how we made this country stronger, more prosperous.”