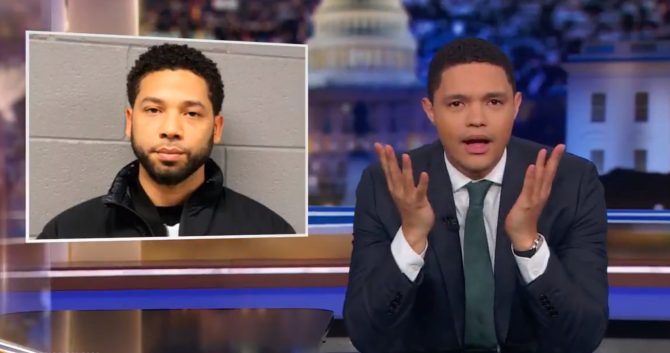 The Daily Show host Trevor Noah has weighed in on the arrest of Jussie Smollet, and he did not hold back, slamming Smollett following his arrest for filing a false police report.

Noah took to the airwaves dissecting every detail of the case against Smollett. The actor allegedly faked a homophobic and racist attack on January 29 to boost his profile and demand a salary increase on the Fox series Empire.

The Jussie Smollett saga began as a story of people who hated him because he was black and gay. Now, people just hate him because he’s an asshole. pic.twitter.com/ItpeasAS6D

“They’re saying he paid his accomplices with a check,” Noah noted. “What, did he write ‘fake hate crime’ in the memo?” Noah steamed. He went on to needle Smollett for paying for a crime with a check, which is easily traceable by police. Noah further ripped Smollett for planning to get the crime on camera, only to discover the surveillance camera in the area wasn’t actually pointing at the scene. “You’ve got to be sh*tting me. He wanted to be caught on camera but didn’t know which way the camera was pointing? You’re an actor. That’s your only job!”

In the final moments of his monologue, Noah noted the real cost of the Smollett hoax: that he terrified queer and people of color with his story, angered Trump supporters for trying to frame them for the crime and embarrassed political figures who referred to the crime as a “lynching.” Noah noted, however, that the Smollett story began as one about people who hated the actor for his skin color and sexuality. Now, Noah notes, “people hate him because he’s an asshole. They’re judging him on the content of his character, not his skin. And that, my friends, is progress.”

The sad thing: Noah has a point. Jussie Smollett posted $100,000 bail on Thursday and has since been released from custody. Meanwhile, the producers of Empire have stated that Smollett has been suspended from the series for the remainder of the season.