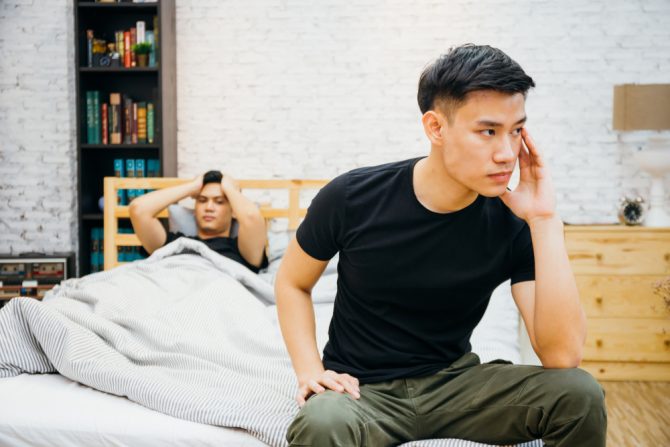 What do you do when your trick doesn’t tell you he’s married (to a woman) until after the two of you have hooked up? That’s what one man wants to know. So he’s writing to advice gurus Stoya and Rich Juzwiak over at Slate for help.

“Recently, I was hooking up with a guy from Grindr who was behaving a bit oddly,” the man’s letter begins. “He invited me to his apartment building but said we had to meet in the building’s pool showers and not his apartment because he was being ‘discreet.'”

Ignoring that first very obvious red flag, the man agreed to hook up with the guy. They met in the pool locker room and snuck into a stall together.

“We started to do our thing, but he got extremely paranoid at any sound, like a door shutting down the hallway, and we had to keep pausing,” the man continues, but, he says, he ignored that second very obvious red flag because “he was hot.”

It wasn’t until after they had finished the deed that the trick dropped the bomb.

“We were getting dressed in the locker area, and he said, ‘Sorry if I seemed jumpy, but I’m married and I live with my wife here.’ Wife. In an apartment down the hall. Dude! I just gave him a look and left.”

The man says he felt guilty afterwards and still isn’t quite sure what to make of the whole thing.

“What do you think is my level of responsibility here?” he wonders. “I avoid profiles that explicitly out themselves as married and looking for down-low play. But if I get the vibe and neither of us says anything, should I feel bad about not asking?”

In their responses, Stoya and Juzwiak both agree that it was really the trick’s responsibility to disclose his martial status prior to the hookup, and that the man shouldn’t beat himself up over something he didn’t know or think to ask about ahead of time.

“It’s not your fault when someone deceives or lies to you,” Juzwiak says. “Part of what many people enjoy about these kinds of hookups is that they’re breaks from one’s everyday life. They are by definition decontextualized.”

He continues, “You hope that people give you enough information to decide to go forward with the anonymous sex in a manner that allows you to make ethical and informed decisions, but there are few set rules, and so behavior varies widely.”

Stoya adds, “I feel like the little bit of guilt is a reasonable reaction, then. I don’t think it’s our writer’s job to tell her, but I also don’t think seeing this person again is a good idea. Significant guilt would be too much—he didn’t set his cap for a man he knew was married.”

“Yeah, it’s well within the married guy’s responsibility to disclose that information,” says Juzwiak. “Once it is disclosed, some of the responsibility is transferred to the recipient. If this is something that vexes him, he could ask ahead of time.”

What do you think about the situation? Share your thoughts in the comments section below…