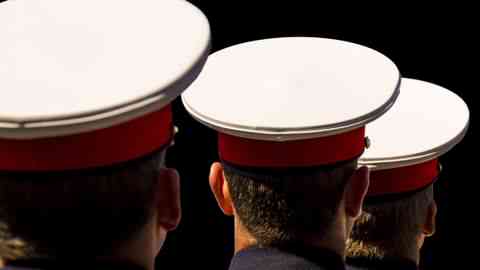 A trio of Marines have been expelled from the military after video of them engaging in a drunken public oral sex romp was uncovered earlier this week.

Police in Arbroath, Scotland say Luke Bowen, Jordan Coia, and Ben James engaged in “puerile and repugnant” sex acts outside the DeVitos nightclub near the Royal Marine base in Angus.

The shenanigans were reported by the manager of the nightclub, who alerted police that “there were a number of males with their genitals exposed outside.” A security guard went to investigate but did not discover anything lurid going on.

CCTV footage showed the three men drinking each other’s urine and engaging in oral sex acts then quickly getting dressed when the security guard comes along.

According to the police report:

The footage shows a former co-accused turning around and beginning to urinate. Luke Bowen then comes towards him, bends down with his head at the other man’s crotch and is seen to be drinking the urine. Luke Bowen then undoes his belt and begins to urinate then drinks his own urine.

Ben James then bends down and drinks Luke Bowen’s urine who then places his penis in James’s mouth. Jordan Coia then bends over and does the same. Craig Lynch then bends down and places Bowen’s penis in his mouth and Bowen then grabs his head and pushes it back and forward imitating a sex act. Bowen then pulls his trousers up just as the security guard is seen to enter the picture.

“It appears there’s an expectation that Marines participate in conduct such as this,” said Deputy Stewart Duncan. “This was puerile and repugnant as the narration clearly demonstrates.”

The men all pleaded guilty to charges of public indecency. A judge determined that there was “no significant sexual element” to their actions and spared them from jail; however, they were sentenced to over 200 hours of community service.

“He had hoped this would be a lifelong career but it has been brought to an end,” one of the men’s attorneys said. “He’s ashamed and embarrassed at this incident and his family and friends now are all aware of the circumstances of it.”