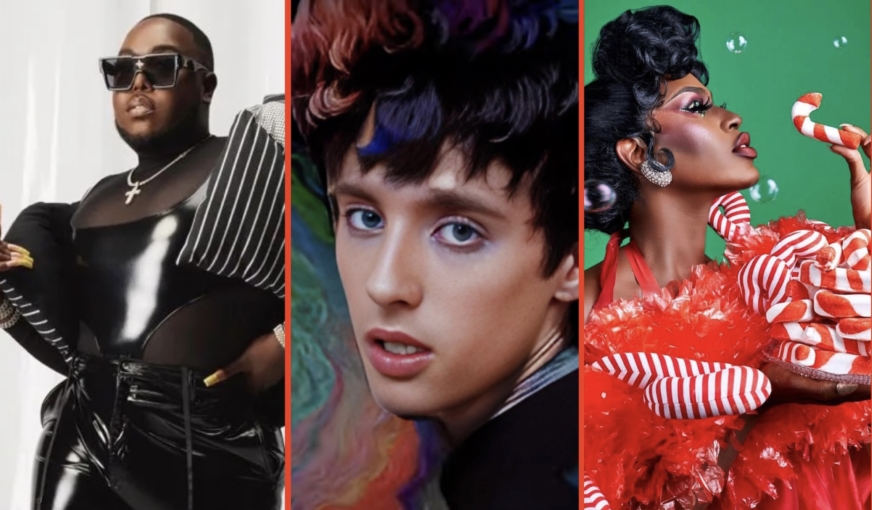 Welcome to the weekend, and welcome to December!

We really started ringing in the end of the year this week. Spotify wrapped up, San Francisco lit up, and we got resident snack Joel Kim Booster making… well, holiday snacks.

But while things cool down outside, this year’s queer music releases are continuing to heat up. Even the latest Christmas song will make you wanna shake your jingle bells.

“You Know What I Need” by Troye Sivan & PNAU

Pop’s Twink-in-Chief has clocked back in to the bop factory for the first time in over a year (not counting a couple Three Months soundtrack cuts) and he’s ready to dance. He’s hopped on a beat from “Cold Heart” producer PNAU for a bumping good time complete with trippy AI-generated DMT art visuals. We’ve gotten hints of new music on the horizon, with an upcoming album allegedly “almost done.” He knows what we need!

Ever since Bob the Drag Queen‘s “Deck a Ho” got taken off Spotify, this writer’s been looking for a new drag queen Christmas bop to love. Ru almost scratched that itch with “Show Me That You Festive“, but Shea has knocked it out of the park with “Xmas Time.” It’s no secret that the “Your Name” singer knows how to put out an absolute jam, and it turns out the holiday season is no different. We’re just jealous of the “A Drag Queen Christmas” Tour attendees that got to see this yuletide groove debut live.

As much as we need to rail against music’s current under-three-minutes industrial complex, this track was meant to be a bite-sized bop. Any longer and it may get repetitive, any shorter and it would’ve been too thin to put out. Instead, Santana hits you with a hype head-rush that gets you equal parts ready to twerk and ready to fight—and then dips before anyone actually starts to tussle.

Your new favorite trans Latina artist is, we can confirm, eating. Rising Puerto Rican star Villano Antillano has had a banner year, and her debut album La Sustancia X is somehow just the cherry on top. Among the sex, drugs, and boasts of songs like “Hedonismo” and “Designer Pu$$y” is the heart of a queer entertainer rising despite it all.

Carlie Hanson’s confessional, personal stylings have built her a strong fanbase, and opening for queer acts like Troye Sivan and Yungblud on tour (as well as her own unlabelled orientation) have added a good healthy dose of fruit flavor to the mix. “Pretenders” comes as another example of her ability to be intimate without seeming disaffected, channeling both that Eilish-ian mood and Willow-style energy. With her debut album out earlier this year and a sophomore project expected in the spring, we can’t wait to hear what she does next.

Join us here again next week for another bop after bop!