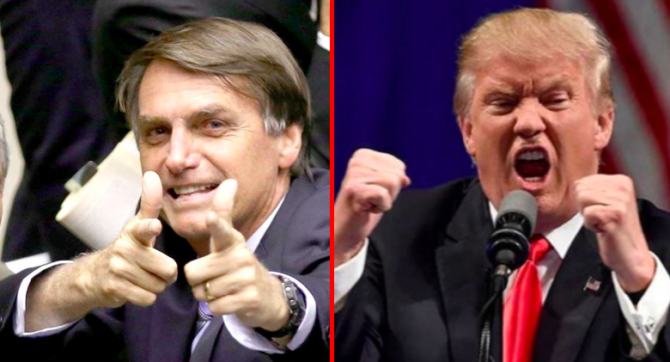 Well, better delete Rio from your bucket list of places to travel because Brazil just elected their own version of Donald Trump to be their next president and he really, really, really hates LGBTQ people.

63-year-old Jair Bolsonaro is a former army captain who is often referred to  as the “Brazilian Trump.” And he just won 55% of the country’s vote.

Bolsonaro is pro-gun, anti-abortion, and extremely antigay with a history of making inflammatory remarks about LGBTQ people, women, and people of different races.

In addition to frequently equating homosexuality with pedophilia, he once said that he would be “incapable of loving a gay son” and that if, god forbid, he did have a gay son, he would hope to see him “die in an accident”.

This morning, Trump tweeted to say he had called Bolsonaro to congratulate on his victory.

Had a very good conversation with the newly elected President of Brazil, Jair Bolsonaro, who won his race by a substantial margin. We agreed that Brazil and the United States will work closely together on Trade, Military and everything else! Excellent call, wished him congrats!

Bolsonaro confirmed the conversation in his own tweet, saying the US president had congratulated him on his “historic election.”

Homophobic violence in Brazil reached record levels in 2017, when at least 445 people died as victims of homophobia.

Attackers targeting LGBT people increasingly cite Bolsonaro or in some cases even wore his name on T-shirts, he said, noting that the LGBT population has long suffered high levels of violence in Brazil.

“These people always existed and always attacked gay people but before they did not have an excuse,” Kvalo said. “We are all very scared.”