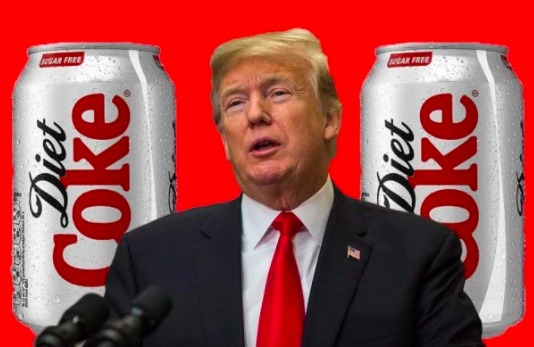 The New York Times has published an inside look at Donald Trump’s presidency one year in and how he’s been coping with his new role as a world leader.

Not surprisingly, being POTUS requires a lot of focus, energy, and, yes, stamina. So how does Donald keep his stamina up? According to the Times, he consumes 12 Diet Cokes a day.

That’s roughly 360 Diet Cokes a month. Times that by the number of months he’s been in office (11) and Trump has consumed around 3960 Diet Cokes since stepping into the Oval Office last January.

Dr David Katz, a nutrition expert at the Yale School of Medicine, tells Metro consuming that much soda is terrible for a person’s bones.

“Twelve cans a day, diet or regular, it’s potentially going to do damage to your skeleton, and eventually that can be a very serious problem,” he says.

I have never seen a thin person drinking Diet Coke.

Of course, every president needs some downtime to unwind. For Donald, this means watching TV. Lots and lots (and lots) of TV.

According to the New York Times:

Mr. Trump spends at least four hours a day, and sometimes as much as twice that, in front of a television, sometimes with the volume muted, marinating in the no-holds-barred wars of cable news and eager to fire back.

Apparently he gets all worked up over what cable news says about him then “he shares thoughts with anyone in the room, even the household staff.”

OK, let’s do the math again. If Donald watches (at least) four hours of TV a day, that’s roughly 120 hours of TV-watching a month. Times that by the number of months he’s been in office and he’s watched well over 1,300 hours of TV since taking office.

Trump claims he doesn’t watch nearly as much television as the Times claims, responding to the report by saying, “I don’t get to watch much television, primarily because of documents. I’m reading documents a lot.”