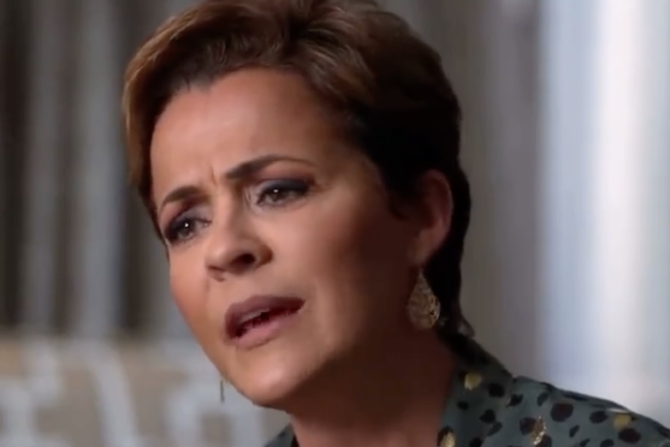 Interviewer Liam Bartlett asked Lake, who is endorsed by Donald Trump and currently leading the Republican field in her state, about Trump’s statements that he would pardon the Jan.6 rioters who attacked the U.S. Capitol.

“Well, that really has nothing to do with being Governor of Arizona. I wasn’t there,” Lake replied.

“Let’s be fair on this. Your man, Donald — your man, Donald, brought it up,” countered Bartlett. Lake appeared to take great offense to his phrasing.

Related: Donald Trump is so damn lazy that he’s not even trying to hide his latest grift

“Why did you say that, sir? Your man, Donald?” she asked.

Trump-endorsed AZ Gov candidate Kari Lake sat down for interview with ‘60 Minutes Australia,’ which aired tonight. Things when downhill fast when she was asked if she agreed with Trump that J6 defendants should get pardoned. She ends up storming off the set. pic.twitter.com/Jmat6BTS1l

“Kari, do you think they should be pardoned?” Bartlett asked one more time.

“I have no say in that. I’m running for governor,” Lake said. “This isn’t something a governor does. You’re trying to twist that to make me look bad.”

Visibly ruffled, Lake transitioned into an attack on Australia’s biggest problem — in her mind. Not enough guns…

“So we would be better off with more guns here?” Bartlett asked.

“Yeah you would. You absolutely would, sir. I feel so sorry for the people of Australia,” Lake said.

After touting American freedom, Lake quickly wrapped up the interview. Once the connection was cut, but before the cameras stopped rolling, she said: “That guy’s a complete nut. Seriously. A complete insane person.”

Lake tries to avoid answering question re Jan. 6th Insurrectionists — whether or not she agrees w/ Trump, that “they should be pardoned”, by saying, “This isn’t something a governor does” and yet she immediately proceeds to lecture another country on how it should conduct itself.

Kari Lake thinks Australia would be better much off with more guns?!! What makes people like her think everyone running around with a gun creates a better society? Someone please explain this to me like I’m a 5th grader, because I really don’t get it.

Her saying Australians have no freedom is beyond insane.

Cognitive-Emotional Dissonance overloads Kari Lake and she retreats to whataboutism.

Her Self-righteousness is another profound signal of Cognitive-Emotional Dissonance.

Kari Lake….oh my…..a FRAGILE snowflake, who walked out of an Australian interview….without answering ANY questions! This Q wants to be GOVERNOR of AZ…She had a tRumpertantrum and walked off set! THIS is not what a TRUE GOVERNOR does…..this “woman” is a coward!

Holy shit what I just watched on #60Minutes has completely thrown me. Kari Lake is fucking nuts. How’s the way she spoke down about Australia and Australians too?!