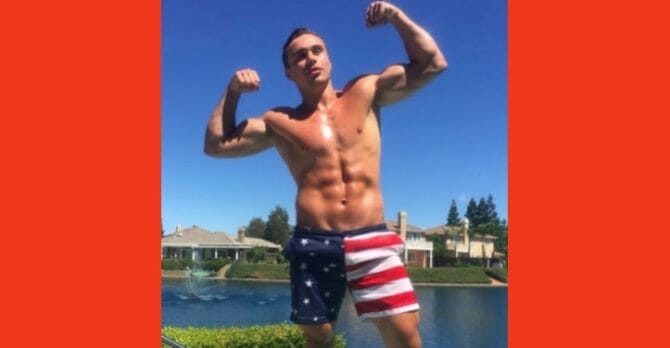 Well, would you look at that — a straight white man has fallen subject to the unthinkable injustice of being held accountable for his actions.

It’s a sad day in America.

And true to form, he’s stepping up to claim his victimhood.

Harmon decided to counterprotest (with his dad, obviously) at a recent demonstration against the separation of migrant children from their parents at the Mexican border. And sure, he’s entitled to hold and decry his beliefs, however unsavory they may be.

But it wasn’t Harmon’s presence at the rally or his pro-Trump sign that caused him to lose his coveted scholarship — he was recorded at the protest shouting “fuck off, fa**ot!”

“I heard a group of men shouting and trying to scare us by saying #sendthemback and even yelled at someone ‘n****r’,” recounted Abdul Lansing, who filmed and posted the video.

Lansing added: “I was so choked so I automatically pulled out my phone to record and see who was being so disrespectful.”

The clip quickly made the rounds on social media, garnering tens of thousands of views. Eventually, Harmon’s new Cal Poly wrestling coach, Jon Sioredas, saw it. That was the end of his scholarship.

Harmon, for his part, has taken some degree of responsibility for his behavior, while still clinging to the idea that he’s been treated unfairly. Where could he have picked that up?

“Saying what I said is definitely not the right thing,” he said. “I am supposed to be there to help the community and be the best person I can be and represent the college the best way I can.”

He should have stopped there, but he didn’t, adding:

“I still feel like my freedom of speech was taken away, and I don’t think my scholarship should have been revoked over something like that.”