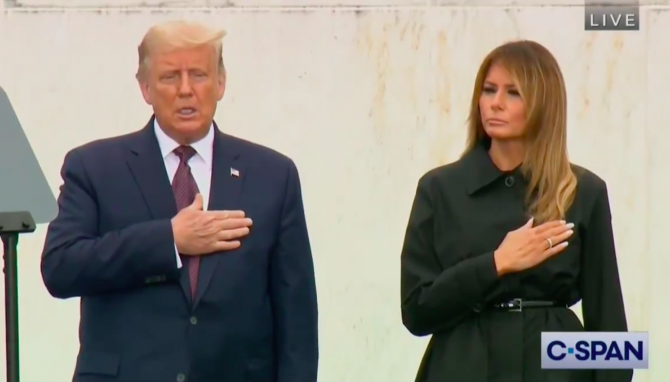 In case anyone was wondering whether Donald Trump knows the words to the Pledge of Allegiance, it seems pretty clear after today that he does not.

The President and First Lady attended a memorial service this morning at the Flight 93 National Memorial site in Stoystown, Pennsylvania to honor the victims of the September 11 terrorist attacks.

At the beginning of the service, the Pledge of Allegiance was recited. C-SPAN footage shows Donald awkwardly swaying back and forth while mumbling along to every other word, except for the “under God” line, which he appeared to leave out entirely.

Black athletes kneeling to the flag and anthem is not offensive. The President of the United States not knowing the Pledge of Allegiance is, especially during a 9/11 ceremony. pic.twitter.com/1GQnQ4VVAY

Of course, forgetting to say the words “under God” wouldn’t be that big of a deal if Trump didn’t make it one himself when attacking Democrats.

For someone who thinks it’s so important that God always be mentioned in the Pledge of Allegiance, you’d think he would make an extra effort to enunciate that particular line.

The Democrats took the word GOD out of the Pledge of Allegiance at the Democrat National Convention. At first I thought they made a mistake, but it wasn’t. It was done on purpose. Remember Evangelical Christians, and ALL, this is where they are coming from-it’s done. Vote Nov 3!

(Quick fact check: Democrats did not omit the word out of the Pledge of Allegiance at the 2020 DNC.)

Footage of Trump’s pained recitation of the Pledge of Allegiance has been spreading all over social media, racking up millions of views in a matter of hours and drawing plenty of criticism.

He didn’t say under god, he mouthed every other word tho.

As a language arts teacher, I wouldn’t exactly classify that at reciting…just saying.

Wait. He didn’t say the words “under God.” Where is the Evangelical outrage?

Proposal for presidential debate entry – each candidate has to bicycle onto stage reciting the Pledge of Allegiance.

I know it’s a common refrain, but if Obama or *any* Democratic politician had failed to mouth ‘under God’ on 9-freaking-11, Fox News would have been wall-to-wall coverage of nothing else until the election.

I like presidents that don’t forget the pledge of allegiance.

Of course, on the list of Trump scandals, this one hardly registers. But it certainly fits well into his dossier of 9/11 specific scandals, which also includes celebrating the fact that his building became the tallest skyscraper in New York City after the Twin Towers fell, repeatedly lying about personally witnessing hundreds (sometimes thousands) of Muslims cheering about the terrorist attacks from Jersey City, joking about the tragedy in a since-deleted 2013 tweet targeting “losers” and “haters,” and siphoning almost $4 million from the 9/11 first responders fund as president.

Also worth nothing is that Trump’s very first tweet this morning, written at 5:13 a.m. on the nineteenth anniversary of the attacks, was a congratulatory note to his buddies at JPMorgan & Chase for “ordering” their employees back to the office amid a worsening pandemic.

Congratulations to JPMorgan Chase for ordering everyone BACK TO OFFICE on September 21st. Will always be better than working from home!

Meanwhile, here’s Joe Biden‘s first (and, so far, only) tweet of the day:

Nineteen years ago, our nation was tested by an unspeakable act of cowardice and hate. Nearly 3,000 lives were cut short: a once-unthinkable toll which tore open the hearts of Americans in every corner of the country. https://t.co/6rAF0dAd1Y

On an unrelated note, if you haven’t registered to vote yet, please do! There’s still time. More info on how to do so HERE and HERE.

Related: Absolutely no one is here for Ivanka’s 9/11 tweet