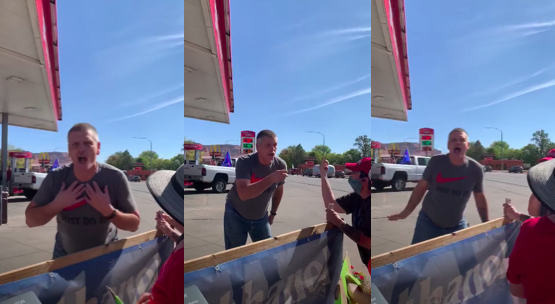 He’s the diehard Trump supporter who was recently filmed harassing a group of peaceful Black Lives Matter activists by shouting antigay slurs at them and coughing in their faces outside a gas station in Kanab, Utah.

“You’re the one talking sh*t to me,” Brissette can be heard yelling at the group. “Everybody knows who I am. My name is Robert Brissette. Find me on Facebook. I hate all you Democrats. Black lives don’t matter. All lives matter!”

Then he singled out one protestor in particular, shouting, “You! You look like a little pansy-*ss piece of sh*t!”

And then he began coughing violently into the protesters’ faces while saying, “Oh, I’m sooooo scared of your f*cking virus!”

Since he invited us to, we found Brissette on Facebook and were not the least bit surprised to discover his page is filled with racist and homophobic memes, pro-Trump and anti-Biden ramblings, coronavirus misinformation, bathroom humor, shoutouts to police officers, and digs at the Black Lives Matter movement.

He also has a statement about the viral video in which he stars, claiming that it does not show the “hole story” of what happened:

Okay to all. do not believe partial Videos they do not tell the hole story. A group will only post what they want you to believe. And With out telling the hole story behind the actions of the person

In true Trump supporter fashion, since becoming famous, Brissette has launched a GoFundMe campaign to try and capitalize on his vile behavior by claiming he is the victim of “race baiting protesters.”

Brissette goes on to say that he was just minding his own business pumping gas into his pickup truck when “some BLM/Biden people” allegedly started laughing at him.

“Every one around me was laughing,” he alleges. “Two of the protesters threw rocks at me. I went to confront them and was totally verbally attacked. So without touching anyone I called out the BLM at this point someone started recording it. During my rant two women hit me. And now I’m being charged with starting it.”

“I need help to clear my name against these race baiting protesters. Anything can help me with  lawyer fees thank you.”

Since launching the campaign yesterday, Brissette has raised a grand total of $25 towards his $10,000 goal.

“Help me to combat these people,” he writes. “Please. And any donations will not be used for any reason other then [sic] the legal cost. And will refund any un used funds thank you.”