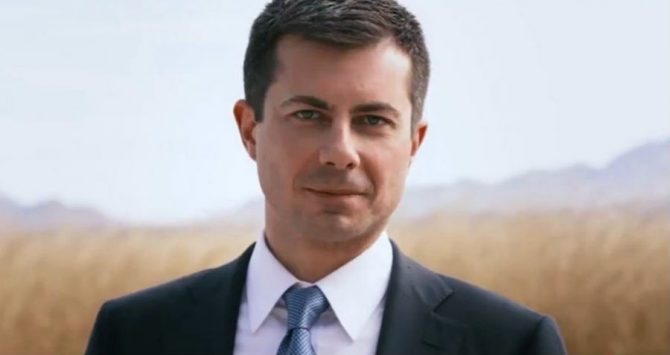 Joe Biden tapped Pete Buttigieg to be his transportation secretary yesterday. If confirmed, Mayor Pete will become the first openly gay person ever to serve as a member of the presidential Cabinet.

Within minutes of the announcement, Trump supporters were calling Buttigieg’s historic nomination #fakenews. They argued that Richard Grennell was actually the first openly gay person to serve as a member of the presidential Cabinet when he was appointed Acting Director of National Intelligence by Donald Trump earlier this year.

While Trump & Co. love making this claim, there’s always been a caveat that they’ve ignored. Because while Grenell was, indeed, appointed to Trump’s cabinet, he only served in an interim capacity for three months, and he never had a formal Senate hearing because Trump had him jettisoned out the minute it became clear he’d never get confirmed.

Acting officials typically don’t have the stature to implement new programs or regulations that would have significant effect, and lack the access to the networks that would get them help from the White House and other agencies.

Basically, acting officials like Grennell keep the departments they’ve been assigned to oversee running in the most basic capacity and aren’t authorized to give any major directives or make any sweeping changes. Sorta like when your co-worker goes on vacation and you fill in for them for a week or, in Grennell’s case, 12 weeks.

Of course, Trump supporters have never been great at paying close attention to details or believing, you know, facts, so they’re pissed that media outlets are reporting Buttigieg is set to become the first openly LGBTQ cabinet official in history.

Pete Buttigieg will NOT be the first openly gay cabinet official in American history.

That was @RichardGrenell appointed by @realdonaldtrump

Leftists and Democrats: We WILL NOT allow you to rewrite history. Trump and Ric already made it.

Who is @RichardGrenell? Oh, right – he’s a Republican and therefore doesn’t count. Got it.

What about @RichardGrenell ? He was confirmed. Worst “investigative journalist” ever.

I am calling on @PeteButtigieg to step up and correct this intentionally misleading information that is erasing the legacy of @RichardGrenell who made LGBT history and fought to decriminalize homosexuality worldwide.

This is beyond politics.
Do the right thing.
Speak up! pic.twitter.com/ISmzux9GiF

More fake news from the king of fake news. Have you ever heard of Ric Grenell?

Why are so many people saying Pete Buttigieg would be the first gay cabinet member? Wasn’t Richard Grenell the first?

.@RichardGrenell I owe you an apology.

Yesterday on my show ‘Making Money’ I reported Pete Buttigieg would be the first openly gay person to serve in a WH cabinet.

Richard Grenell has that distinction when he became acting DNI in the Trump cabinet and he did a hell of a job.

@RichardGrenell isn’t gay? I know he was confirmed.

The mainstream media is rewriting history at a George Orwell 1984 level when they continue to repeat that @PeteButtigieg will be the first LGBTQ Cabinet member – totally ignoring @RichardGrenell who served as Acting DNI under Trump.