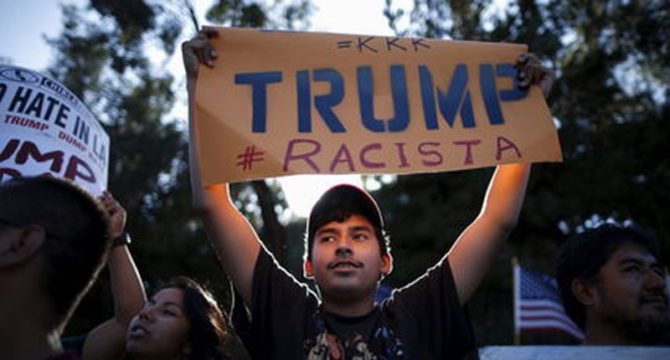 The current occupant of the White House managed to turn down the TV for a few minutes Friday to sign an executive order barring admission to the United States all refugees from Iraq, Iran, Syria, Yemen, Sudan, Libya and Somalia–and plunging the world into temporary chaos.

In the ensuing worldwide furor–in which even longtime American citizens who happen to be Muslim were detained at airports as their loved ones searched frantically–it was little noticed that the list of banned nations excludes several majority-Muslim ones, including Turkey, the United Arab Emirates and Indonesia, where the Trump Organization, now run by the president’s adult kids, has significant outposts. These countries have also faced terrorism and threats of violence. Daddy, please let our employees travel. (Just don’t tell anyone we had this conversation.)

The ED had the fingerprints all over it of White House chief strategist, white supremacist, and fake news creator Kevin “Steve” Bannon, who apparently was the last person Trump talked to before agreeing to put his signature on the dotted line. Yes, Virginia, a white supremacist is the president’s most trusted advisor.

Vet this: On Saturday Ann Donnelly of the U.S. District Court in Brooklyn granted the ACLU’s request to stop the deportations after determining that the risk of injury to those detained, including exiled LGBTQ people from antigay nations, by being returned to their home countries required the immediate action. Donnelly was appointed by President Obama.

While Donnelly and much of the world reacted with incredulity to Trump’s order, the Grand Old Party remained remarkably obsequious, with leaders Mitch McConnell and Paul Ryan issuing statements supporting the crackdown despite having opposed similar Trump pledges during the campaign.

Related: Trump just issued press release boasting about how great he is; internet begs to differ