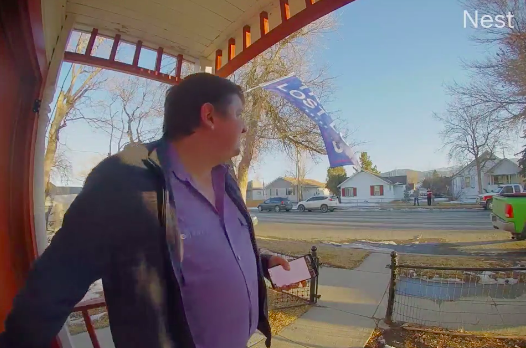 A disgruntled Trump supporter was caught on tape shouting homophobic slurs at a gay man for flying a flag on his front porch that said “Trump Lost LOL.”

Michael Challans was just slapped with a $100 citation by local police in Helena, Montana after he used “loud, profane, and offensive language” while harassing with his neighbor, Tim Mielke, from across the street.

Security camera footage shared on Reddit earlier this month shows Challans shouting at Mielke from across the street.

“When are you going to take your f*ggot-*ss flag down?” he yells for everyone in the neighborhood to hear.

“When you take yours down,” Mielke replies, referring to the pro-Trump flag in Challans’ yard.

“F*cking queer,” Challans quips. “You’re in the wrong neighborhood. How about you go over to a f*cking Biden neighborhood?”

“Of course someone like you would say that,” he replies. “That’s what all you f*cking f*gs say.” Then he calls him a “f*cking p*ssy.”

Speaking to the Helena Independent Record, Challans called his citation “retarded” and said he has “no problems with gay people.”

He also accused Mielke of trying to “stir up problems” and said he doesn’t see any issue with the pro-Trump flag he’s flown in his own front yard for the last four years.

“This is my neighborhood,” he told the newspaper. “If you move in you will have to look at my stuff, if you like it or not… It’s my house, it’s my property. They ain’t censoring me.”

As for Mielke, he says he put up the anti-Trump flag in response to Challans’ pro-Trump flag because, “I just was sick of the entire neighborhood looking like it was for Trump. I wanted to let people know other views existed.”