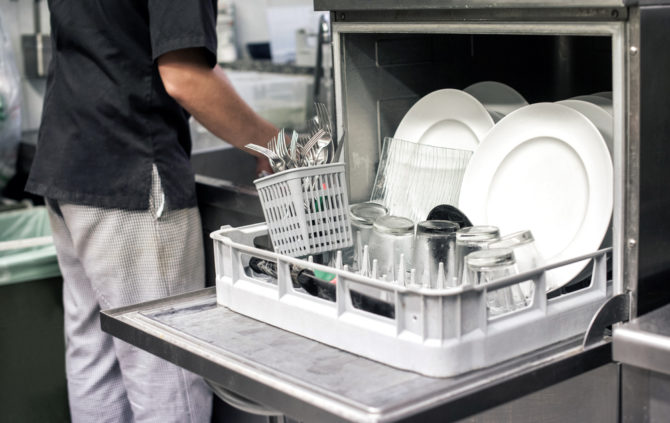 Eric S. Dreiband is Donald Trump‘s pick to head the U.S. Department of Justice’s Civil Rights Division. During his senate confirmation hearing this week, Dreiband said he’d be “zealous” in protecting civil rights of all people… unless they’re LGBTQ, then he’s not sure.

While speaking before the Senate Judiciary Committee, Dreiband recounted an incident from his tenure with the Equal Employment Opportunity Commission involving a “totally deaf” dishwasher in a fast food restaurant:

There was a matter that came out of our St. Louis office when I served as general counsel of the EEOC. It involved a case of an individual who was totally deaf. He applied to work as a low-wage dishwasher at a fast-food restaurant in that area. The manager of the restaurant told him that he would not hire him, and he would not hire him because he was deaf. Blatant disability discrimination.

Dreiband went on to explain that he forwarded the case to the EEOC commissioners, urging them to take up the case. They did and the “totally deaf” dishwasher won a $25,000 lawsuit. #success

Related: Former Cheesecake Factory dishwasher sues company for discriminating against him for being straight

Dreiband said the case was “particularly important to me” because “it’s something I’m particularly proud of.”

“The United States government was able to seek relief for that individual and to send a message to the public that that kind of blatant discrimination will not be tolerated,” he boasted.

Later on in the hearing, Sen. Sheldon Whitehouse of Rhode Island brought the story of the “totally deaf” dishwasher back up.

“Go back to your story about the deaf dishwasher,” he said. “Remove his deafness. Insert, instead of being deaf, that this individual is gay. Does he get treated the same way by you under the Civil Rights Division?”

Related: Christian Couple Stiffs Gay Waiter, Says “Queers Do Not Share In The Wealth Of God”

Dreiband hesitated for a moment, then responded:

Well, it depends on the law. If you’re asking about Title VII of the Civil Rights Act of 1964, and the sex-discrimination prohibitions in that law, that is a matter that is currently in litigation and pending before the United States Court of Appeals for the Second Circuit. … And I think it would be inappropriate for me to comment any further and will [wait] to see what the Court of Appeals does.

Later, Dreiband was asked by Sen. Chris Coons of Delaware if transgender students are protected from discrimination based on their gender identity under Title IX of the Education Amendments of 1972.

Dreiband answered by, well, not answering. Instead, he sidestepped the question, saying:

I certainly think protections for individuals against discrimination, including sex discrimination, and in cases like the Shepard Byrd Hate Crimes Act—that protects against hate crimes because of gender identity status—are very, very important.

Related: Gay couple shamed for asking to share a sundae at a swanky D.C. restaurant