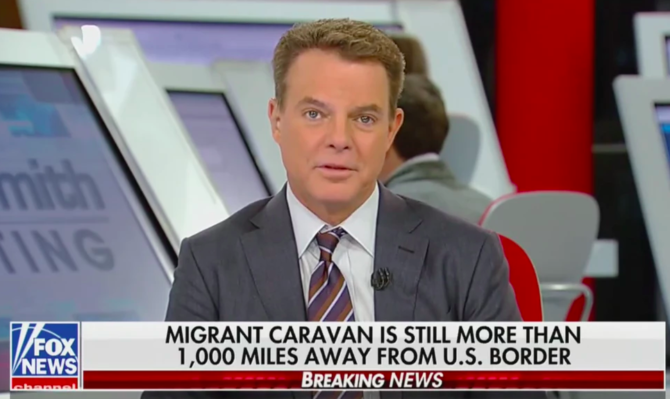 Fox News anchor Shepard Smith pushed back against Donald Trump‘s recent lies about the United States being in grave danger due to the “migrant caravan” coming from the southern border.

“Tomorrow the migrants, according to Fox News reporting, are more than two months away if any of them actually come here,” Smith told viewers yesterday. “But tomorrow is one week before the mid-term election, which is what all of this is about.”

Related: ‘Trump fatigue’ is real and it’s sweeping the nation. Here’s why we must stay woke.

The “caravan” is a group of migrants, mostly from Honduras and Guatemala, half of whom are women and girls, seeking asylum in the U.S. They’re walking thousands of miles together because they feel safer as a group.

“There is no invasion,” Smith assured viewers. “No one is coming to get you. There is nothing at all to worry about.”

Smith’s remarks contradict those made not only by Trump but by several of Smith’s Fox News colleagues who have regularly railed against the “caravan”, warning viewers about “hordes” of people coming to “invade” America with diseases like “polio,” “smallpox” and even “leprosy”.

Shep Smith on the migrant caravan: "There is no invasion. No one is coming to get you. There is nothing at all to worry about." pic.twitter.com/4dLmPuZem0

“President Trump is calling the caravan a national emergency,” he said. “And he’s claiming criminals and unknown alleged Middle Easterners are mixed in with the crowd.”

Yet this hasn’t stopped Trump from deploying 5,200 troops to the southwest border. That’s in addition to the 2,000 National Guard members already in place, making the total number of personnel larger than the combined U.S. military footprint in Iraq and Syria.

Many Gang Members and some very bad people are mixed into the Caravan heading to our Southern Border. Please go back, you will not be admitted into the United States unless you go through the legal process. This is an invasion of our Country and our Military is waiting for you!

Because if there’s one thing tired and starving native Spanish speakers who’ve been walking hundreds of miles on foot to flee gang violence and poverty are doing right now, it’s checking Twitter to see what Donald Trump has to say.