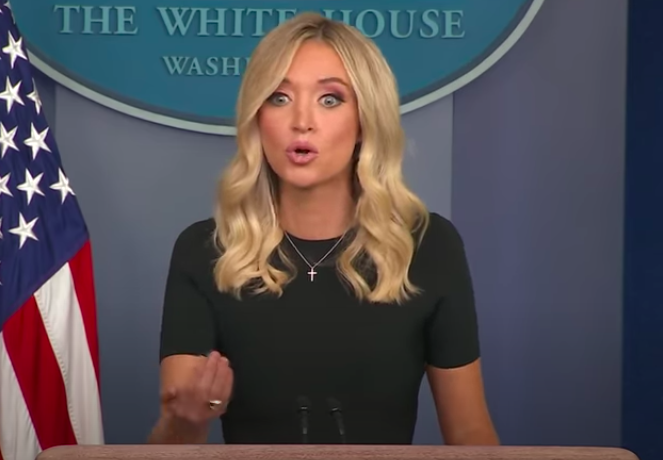 When she’s not bashing LGBTQ people or talking trash about her boss on live TV, Trump’s new press secretary Kayleigh McEnany is defending his assault on vote-by-mail, falsely claiming that it will lead to election fraud.

She’s also been peddling the lie on her Twitter page.

? Get the facts about mail-in ballots!

Will the media, and @Twitter, acknowledge these real concerns with mass mail-in voting?

Now, the Tampa Bay Times reports that, McEnany, who believes marriage equality is an attack on “religious institutions” and trans people pose a threat to women’s rights, has voted my mail… nearly a dozen times in the last decade.

The Tampa native has voted by mail in every Florida election she has participated in since 2010, according to a Tampa Bay Times review of her voting history. Most recently, she voted by mail in the state’s March 2020 presidential primary, just as Trump did after he made Florida his new permanent home.

In total, McEnany has cast 11 mail-in ballots over the last ten years.

When asked for comment on her voting-by-mail history, 32-year-old McEnany tried spinning a narrative that made absolutely no sense. In a statement, she said:

Absentee voting has the word absent in it for a reason. It means you’re absent from the jurisdiction or unable to vote in person. President Trump is against the Democrat plan to politicize the coronavirus and expand mass mail-in voting without a reason, which has a high propensity for voter fraud. This is a simple distinction that the media fails to grasp.

For years, the state has allowed anyone to vote by mail for any reason. Also, voting my mail doesn’t have a “high propensity for voter fraud.”

According to the Brennan Center for Justice, there have been over 250 million ballots cast by mail since 2000. In 2018 alone, over 31 million Americans, or 25.8% of election participants, voted by mail.

Despite these enormous numbers, one study determined that the rate of fraud is roughly 0.0000001 percent, meaning you’re more likely to be struck by lightning than have your vote stolen.

Hey, remember earlier this month when McEnany pinky swore to reporters that she would “never lie” to them? HAHAHA.

"I will never lie to you. You have my word on that." — Kayleigh McEnany during her first press briefing as press secretary (bookmark this) pic.twitter.com/PqUhRAWiun