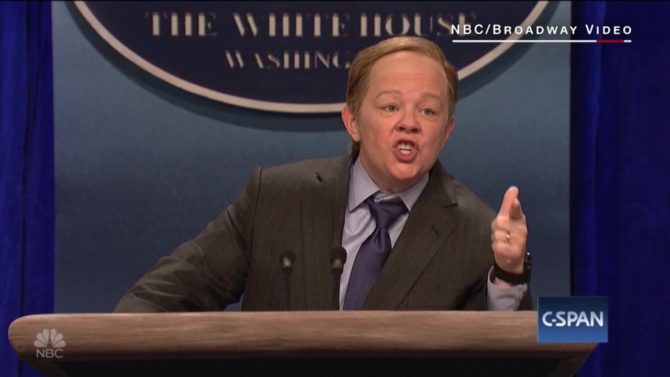 Press secretary and enemy of enunciation Sean Spicer (artist rendering above) had a lot on his plate during a Tuesday press conference, what with leaks and scandals plaguing his boss’ administration.

And while the majority of the conference was dominated by the Michael Flynn debacle, Spicer did find a moment to discuss Trump’s Monday meeting with the Prime Minister of Canada, Mr. Trudeau.

Mr. Joe Trudeau, that is.

“Yesterday the president set — had an incredibly productive set of meetings and discussions with Prime Minster Joe Trudeau of Canada,” he said, “focusing on our shared commitment to close co-operation in addressing both the challenges facing our two countries and the problems throughout the world. Our countries share a profound economic interest, with more than $2 billion in two-way trade flowing across our border every day.”

We’re sure the actual Prime Minister of Canada, Justin Trudeau, was happy to hear he made such a good impression.

For all the Canadians wondering who Joe Trudeau is, he's Justin Trudeau's evil twin. Goatee and all. #JoeTrudeau pic.twitter.com/PdriJkX0Vy

#JoeTrudeau was the sole survivor of the Bowling Green Massacre who went on to become the Prime Minister of Columbia.

Joe Trudeau is an example of someone who's done an amazing job and is being recognized more and more. @PressSec #joetrudeau #sorrycanada

So I guess @seanspicer is wanting to make things easy for SNL's writers? Maybe? Seriously, this stuff is writing itself. #JoeTrudeau

Now we know how Nick Jonas feels being called Joe sometimes. #JoeTrudeau Calling out all your kids' names until the right one #spicey

I bet half of you can't even locate Canada on a map. #JoeTrudeau

Turns out Justin Trudeau has been pronouncing his name wrong for years. Thanks for clearing that up, Spicey. #JoeTrudeau #alternativefacts