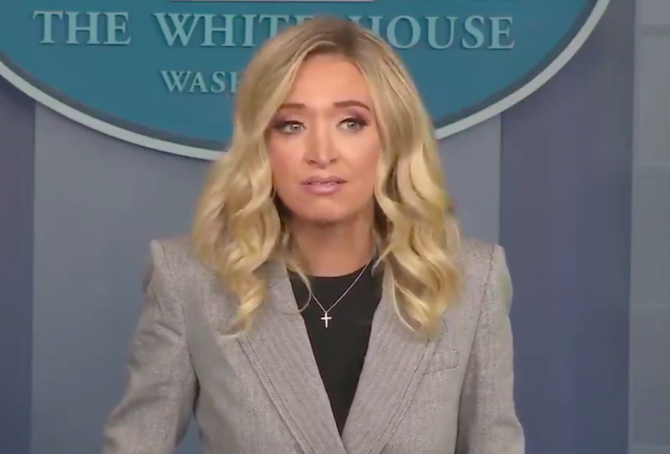 Donald Trump’s recently-installed press secretary, 31-year-old Kayleigh McEnany, is currently fighting to keep her cushy new job after footage of her trashing Trump on CNN and Fox News throughout 2015 began been circulating online.

In the tapes, which surfaced yesterday, McEnancy calls then-candidate Trump’s rhetoric “racist,” “hateful,” and “derogatory.” She calls Trump himself a “Republican in name only,” a “showman,” and a “sideshow.”

“This is not a true Republican candidate,” she says in one TV appearance. “And the fact that he’s being portrayed as such in media is troublesome and not accurate.”

“I don’t want to claim this guy,” she boasts in another.

Well, just a short while ago, McEnany, who has a long history of making disparaging remarks about LGBTQ people, held a press conference, during which she was directly asked about her anti-Trump comments.

“Well, I’m actually glad you asked that,” McEnancy told reporters, “because for about the first four weeks of the election, um, I was watching CNN, and I was naively believing some of the headlines that I saw on CNN.”

McEnancy then went on to say she “encourages” people digging up dirt from her past to instead look within themselves for any hypocrisies they may have committed in their own lives.

Asked whether she still believes the things she said in 2015, McEnancy dodged the question, replying, “I support this president. There is no questioning that. I’m so honored to work for him. Next question.”

""I was watching CNN and I was naively believing some of the headlines."pic.twitter.com/0190wOYoer