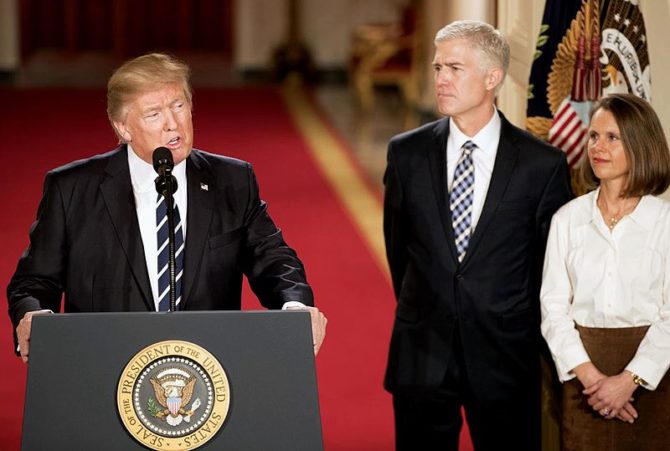 In his first interview after winning the presidential election, Donald Trump said he considered same-sex marriage to be a settled issue and that he was “fine” with it.

This was a reversal of his comment calling the Obergefell v Hodges decision, which made marriage equality the law of the land, “shocking,” saying he was in favor of states deciding the issue for themselves. He also campaigned on appointing judges “in the mold of” the late Supreme Court Justice Antonin Scalia, who was certainly no friend to the LGBTQ community.

Related: The only argument for marriage equality anyone should need

The plaintiff in that case, Jim Obergefell, said that he did not believe Trump when he claimed he would not go after gay marriage.

“He flips on pretty much everything he says,” he said. “Saying it’s settled law — that doesn’t mean anything.”

It seems Obergefell’s distrust was well founded, as we begin to see how LGBTQ rights are likely to wind up on the chopping block in the not too distant future.

There have been reports of a religious freedom executive order that would allow for a license to discriminate against the LGBTQ community, a draft of which shows that it would go even further to erode equality than originally feared.

While the Trump White House has done their best to quiet those concerns, and sources claiming his daughter Ivanka and son-in-law and adviser Jared Kushner were successful in stopping its progress after public backlash amid media reports, LGBTQ advocates remain on watch.

And for good reason, as Trump spoke at length about the importance of “religious freedom” at the National Prayer Breakfast, and his pick for the Supreme Court, Neil Gorsuch, ruled in favor of such exemptions in the Hobby Lobby case.

Congress could also pass the First Amendment Defense Act, which would also allow for discrimination against the LGBTQ community, by protecting those who would refuse goods and services based on the beliefs that: “(1) marriage is or should be recognized as the union of one man and one woman, or (2) sexual relations are properly reserved to such a marriage.”

Trump has pledged to sign it if passed, and Attorney General Jeff Sessions recently defended it in an exchange with Sen. Al Franken during his confirmation hearing process.

Providing a religious carve out to equal protections under the law could mean that while you get to stay married, you may find your rights in areas like employment, healthcare, housing, and private business quickly disappearing.

Meanwhile, lawmakers in Tennessee have introduced the “Tennessee Natural Marriage Defense Act,” which would result in the state only recognizing marriages between one man and one woman, and would require state agencies to ignore the Obergefell v. Hodges decision.

It is for this reason that the LGBTQ rights movement better kick itself into full gear, sooner than later. There is no time to waste.