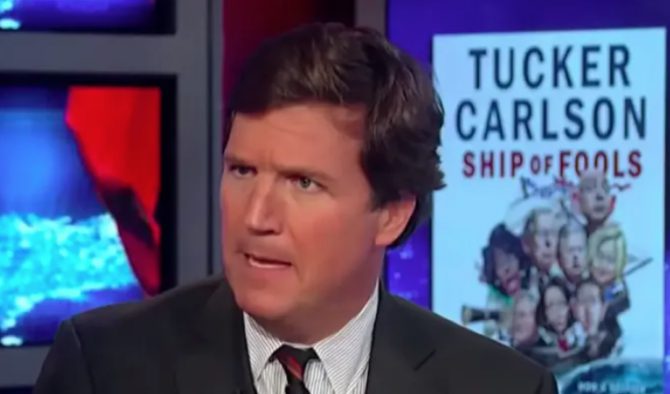 Tucker Carlson continued his parade of lies and misinformation on Fox News this week when he brought on attorney Joseph McBride to present a “bombshell”: A man with red face paint and wearing a “Keep America Great” hat at the Jan. 6 insurrection is actually a law enforcement officer whose mission that day was to incite the mob and discredit Trump’s supporters. It took less than three days for this theory to be confirmed as total bull.

Carlson has regularly, and falsely, suggested on his program that the Capitol riot was a “false flag operation,” organized by anti-Trump government forces to damage Trump and his supporters.

“Let’s put [the man’s] picture back on the screen,” Carlson said Monday on his program. “Who is this person? Why hasn’t he been charged? That’s a very simple ask.”

“He is clearly a law enforcement officer,” McBride said.

Of course, if Carlson actually wanted to know who the mystery man is, he could have made an attempt — any attempt — to find out.

Because wouldn’t you know it, the man in the red hat is actually a huge Tucker Carlson fan, reports HuffPost. Not only that, he’s also somewhat famous among St. Louis Cardinals fans as “Rally Runner,” the baseball fan who runs the perimeter of Bush Stadium during the team’s home games.

A look at his Facebook page also shows he’s a big Trump supporter who believes the 2020 election was stolen. He even posted pictures and video from his trip to Washington on Jan. 6.

“I get a riot shield, and I’m not trying to cause any violence, but I’m trying to be the furthest person to get through all the way, or at least get the furthest,” he said in a Facebook video. “I took up a lot of space, and I had the rioter shield, and I was right up there, and for some reason, like, the other people up there on the front lines with me, they did something similar…. It’s like they followed my lead, kind of, and it turned out to be a great strategy because the whole crowd was doing that, was able to push further than we had gotten the whole time, the entire time. We pushed them all the way into the doors.”

When presented with this evidence, McBride told HuffPost: “If I’m wrong, so be it, bro. I don’t care. I don’t give a sh*t about being wrong.”

McBride added he was merely “theorizing”, “not publishing conclusive findings.”