Most of us don’t even get one famous person in our family, but a lucky Bay Area Latinx clan got two. You likely know of the force who is legendary drag queen Juanita MORE! Activist. Philanthropist. Muse for murals and tattoos. And most recently, Empress of the Imperial Council of San Francisco, the world’s oldest LGBTQ+ nonprofit.

But—bonus!—these two stars are cousins, having grown up in the East Bay in a large, loving Mexican-American family.

We asked Cecilia to sit down with Juanita, whom she describes as “someone whom I deeply admire and whose jewelry collection I covet,” to talk about the latter’s efforts to modernize and fundraise for the Imperial Council of San Francisco, her favorite kinds of activism, and her infamous naked dinner parties—and of course, makeup remover. (Juanita takes off the crown Saturday.)

CV: Hi! First of all, I miss you. Second, it seems like you have your hands completely full right now. How are the puppies?

JM: The puppies are great. Jackson is going to turn 11 this year and he is starting to lose his hearing. With the new puppy, Macho, in the house, I’m starting to see how old Jackson really is, and that’s breaking my heart because Jackson truly is my number one boy. Macho runs around biting everything. But he’s absolutely adorable and just stares at me and wants to lick my face to no end.

So your reign [as Empress of the Imperial Council of San Francisco] is coming to an end. It sounds like it took some convincing to get you to want to do this initially?

Yeah, I’d been asked before to do it. One of our past empresses, Mercedez Munro, sat down with me and said, “We need you to do this. This light is really dimming and you are someone who everyone loves, and who is well known in the city.” After watching the movie 50 Years of Fabulous (2018), I really felt that I did not want to see this organization fade away. 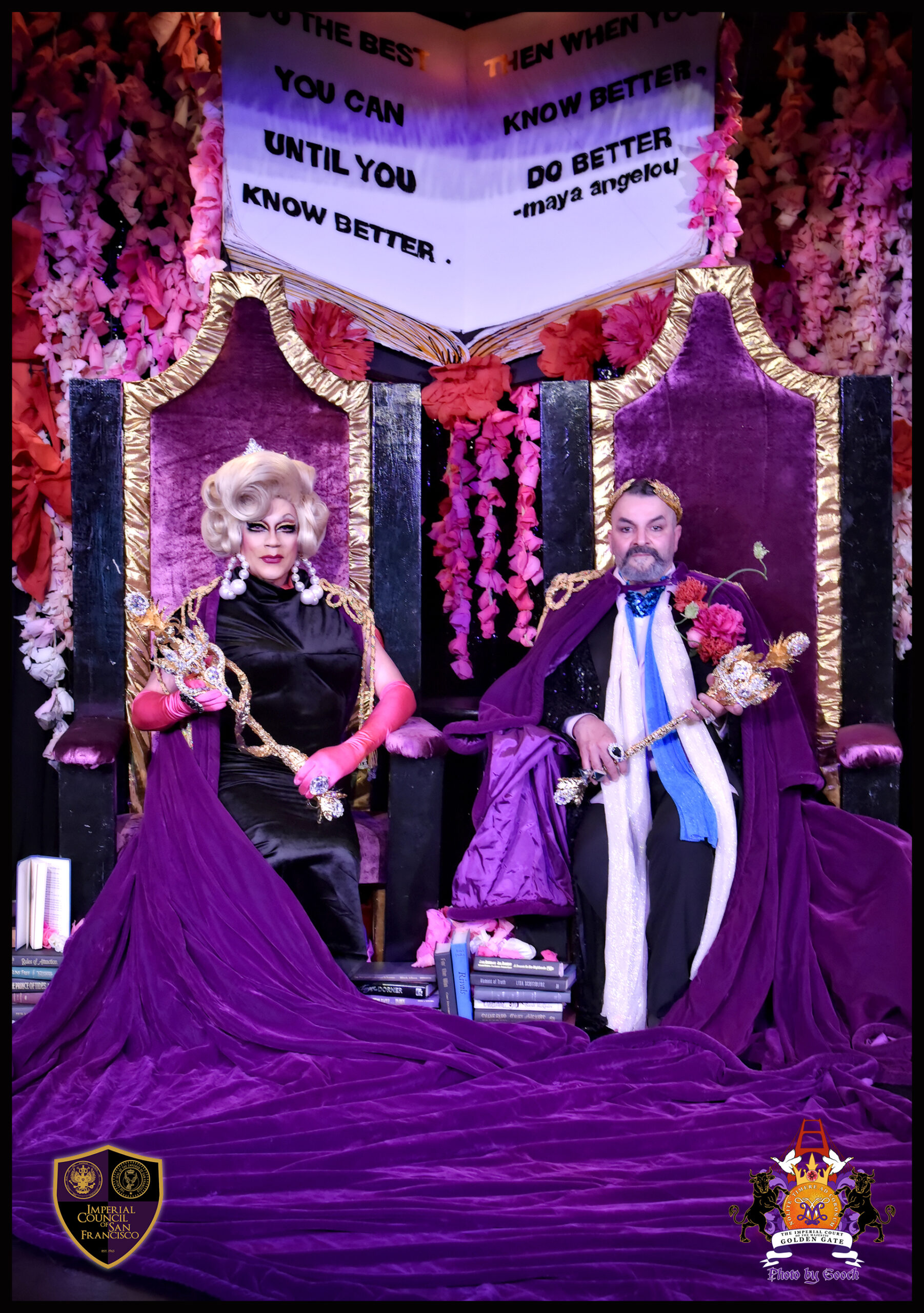 Juanita MORE! and Mr. David Glamamore at their coronation as Empress and Emperor of the Imperial Council of San Francisco last April. (photo: Gooch)

Why do you think the light had started to dim?

Well, I think there are a couple of things. The court really peaked during the AIDS crisis, because that’s when they were really getting floods of money to support the community to help people with housing, medical fees, all that kind of stuff. And then after that, other organizations came into place like the San Francisco AIDS Foundation to start giving that support.

This is sort of like interviewing the outgoing Miss America, that scene at the end of the pageant where they hand over the crown and show the highlights reel. What else is in your highlights reel?

My main goal was to shine a light on the organization. So many younger people who follow me didn’t even know about it. They were like, “We had no clue this exists, like zero clue.” So that was inspiring. I got the council an Instagram and Twitter account, which they did not have. I put aside money that I had raised last year and paid to update their website, which looks gorgeous. So now we’re running with a brand new website. As we were going through the year, the Emperor Mr. David Glamamore and I, we did things that we weren’t even aware had never been done. We created other courts under us to support what we do. There’s the Golden Gates, the Gays, and the Cows. We have created probably the most diverse group in the history of the court. Finally, during the summer of last year, we donated almost $70,000 to the Queer Nightlife Fund, an organization that had started during the pandemic to help nightlife workers stay afloat.

I love the history of this organization, founded by someone [José Sarria] who was dressing in drag basically when it was illegal to be gay. the people who came before you, we’re talking about trailblazers in the community.

Yes, for sure. José was also one of the first openly gay men to run for political office in the US and that was in 1961 when he ran for supervisor here. No one thought he was going to get one supporter, and he ended up getting a lot of votes, which made people aware that the queer community here was big, was strong. And José really pushed to bring the community together. He was a pioneer.

Okay, so humblebrag for me here. How much money did you help raise over the last year?

You know, I fight with the treasurer all the time in the most loving way. I still don’t know what our total is. And I feel like he’s keeping it a secret until next week when the Emperor and I step down. I feel like it’s close to $180,000 that we’ve raised. 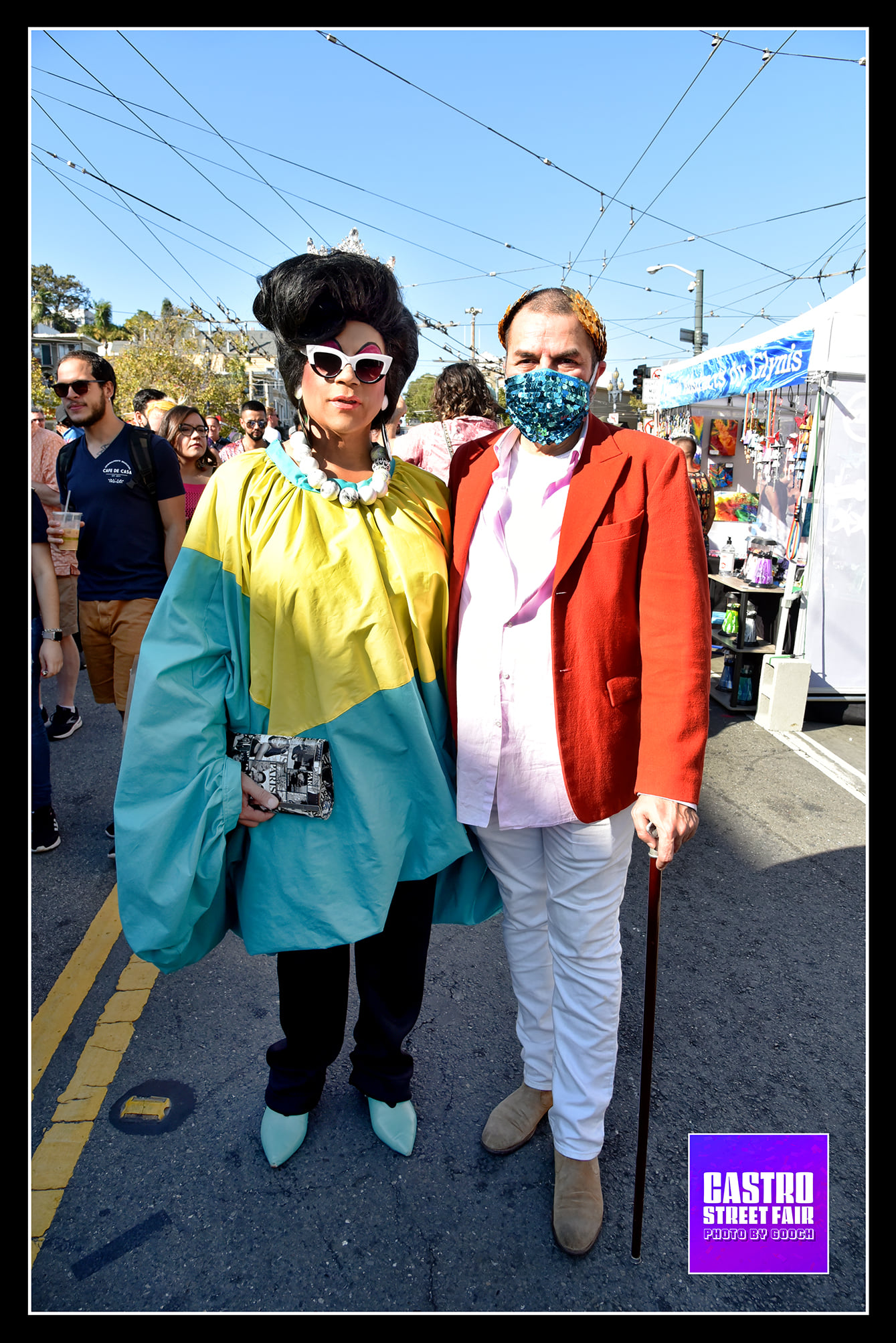 The Empress and Emperor at the 2021 Castro Street Fair (photo: Gooch)

One of the things I love most about you is how you use your voice to shed light on communities whose stories are so often overlooked. In terms of your activism, which communities do you feel need the most attention right now?

Our queer youth are a group that I’m constantly trying to support. I look at it this way: They are going to be my voice when I can’t speak anymore, right? And I look at how I grew up being queer. I was very fortunate in being able to just be myself with my family, with my extended family, when I came out at an early age. I was really lucky with that. And there are a lot of kids that aren’t that lucky. So queer youth is super important to me. And then there’s our queer elders. I’ve got a couple of elders in my neighborhood who I look after, one, in particular, is Eduardo. Eduardo’s story is so amazing. When we met, he just started talking to me about his life, how he moved to San Francisco from LA and has pretty much lived in the same neighborhood all his life. I mean, his story just resonated and I just got it and I wanted to know more. Living in San Francisco for so many years I have my own community of queer elders that I feel are so much of who and what San Francisco is, and the reason we love our city.

We come from such a strong line of Mexican women. I know our culture is so important to you. Have you ever felt othered as a Mexican American in this community — in the drag world?

Yes, but not to the extent that I did as a really young kid coming out. There were times in the Castro that I felt unwelcome; the Castro has had a history of racism. And as a kid coming out, being a little brown kid, there wasn’t that representation. You didn’t have people that look like me. The covers of the queer magazines were all white guys with shaved chests. And I didn’t feel like I was cute, but I look back at photos now, and I was! 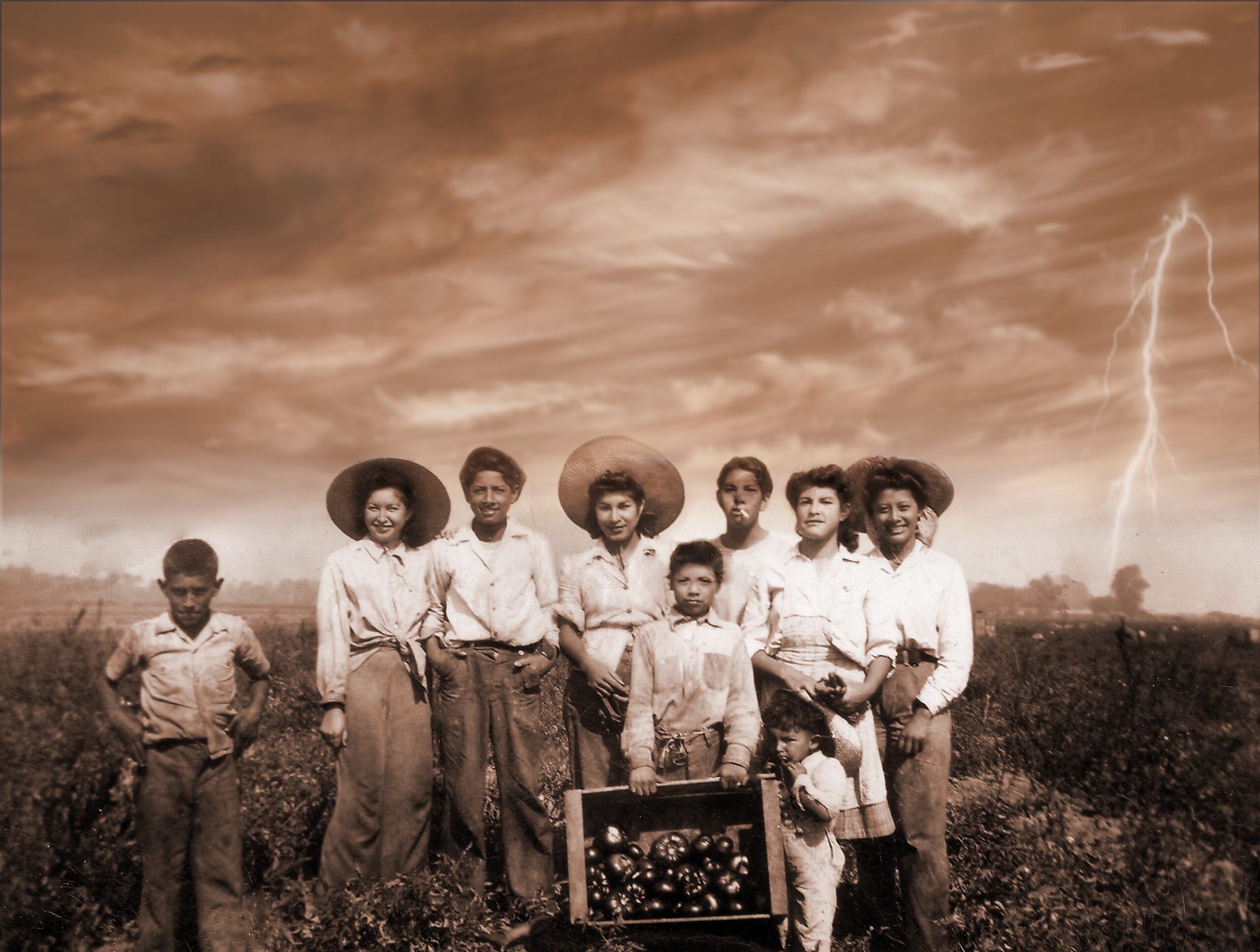 The Orta family and friends picking bell peppers in the East Bay in the late ’40s. (Photo: courtesy of Juanita MORE!)

Are you kidding me? Hottie hello. We all knew you were cute. Has it gotten better?

As far as representation in drag, I do think so. There are a lot of really important things happening right now in nightlife. Whether it’s brown, black, Asian, there are some really amazing people that are doing some really great work in the drag community.

I know, it’s true! I’m hoping to do it soon. I’ve been talking to the boys who run the bar and are in the kitchen. I’ve had guest chefs come from all kinds of places. I have one from Top Chef who wants to come and cook at the next one.

Well, in the kitchen, the boys need to keep their clothes on because they’re literally cooking. Yeah, that’s dangerous. But I do have a couple of chefs that, when they’re done cooking, get naked. Enjoy the party.

You did your very first drag show how long ago?

I remember my first performance. It was at a bar called Lily’s at the time, which was at Market and Valencia. And I remember what I did, a Dinah Washington song. I really started to do drag because I was not going out anymore. We were just getting through the AIDS epidemic and I didn’t want to go out. And so getting in drag for me was a new way of being able to do that.

And you’ve never looked back. Okay, in the name of hard-hitting, probing journalistic questions, I have to ask—how long does it take you to get ready and what do you use to take off all your makeup?

It takes me two hours and I sometimes wish it was less but that is how long it takes from the start to fully dressed. My makeup remover that I love is Eve Lom. And baby wipes. You know, they work, so yeah.

Your resume is long and impressive. Not only do you have Empress on there, you’ve got the SF Pride Lifetime Achievement Grand Marshal award. So what’s next?

That’s a good question. I know I need a bit of a break. I want to refocus and do some things that bring me really simple joy. I haven’t even had the chance to DJ anyone else’s parties because I had so many other commitments with the Court. So I’m excited to do that and excited to meet new people. And maybe a vacation! 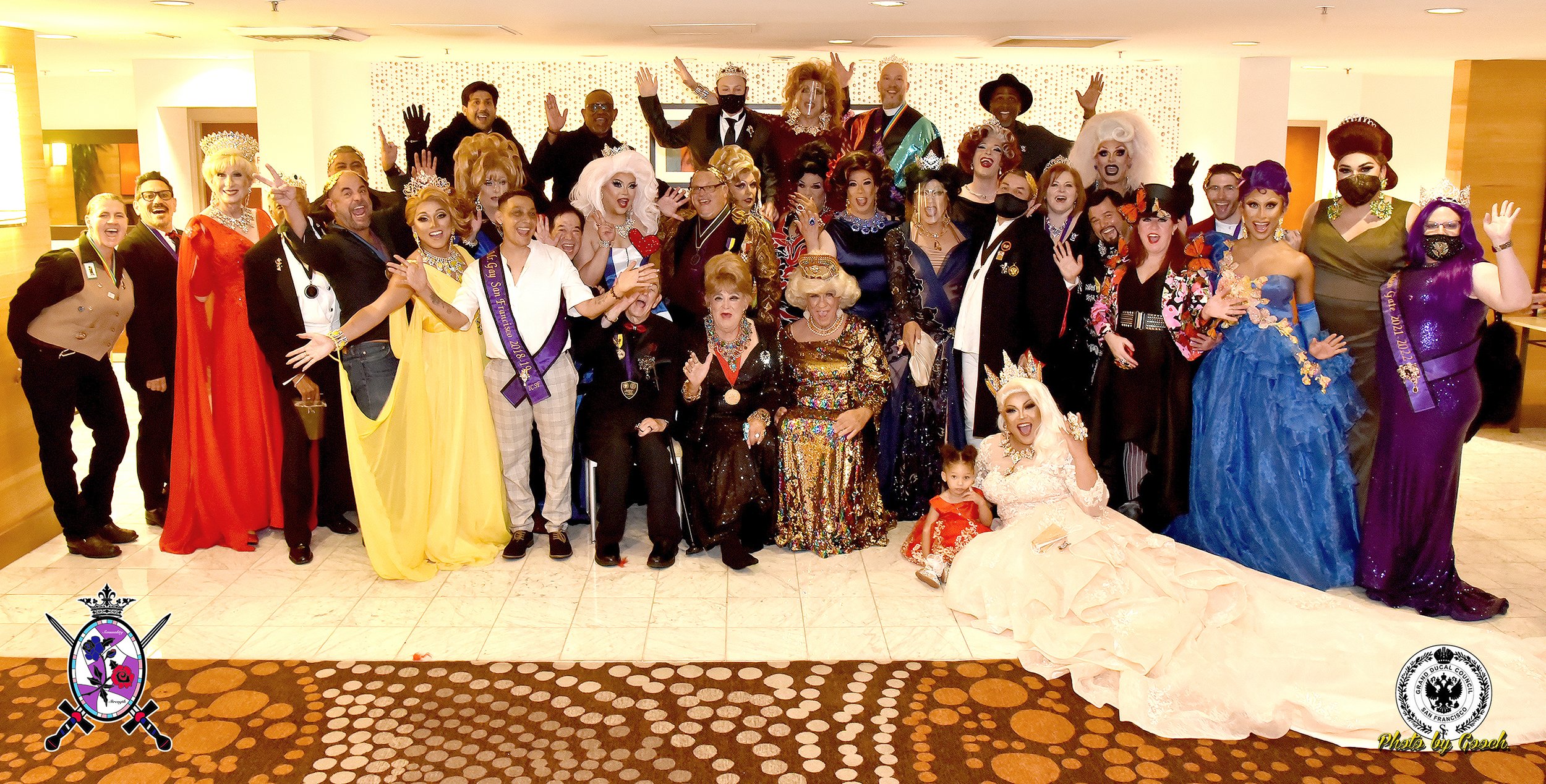 I would love to have José Sarria. Cleve Jones, of course, actually has been here for dinner. I would love to have some other activists in our history that have just done amazing things and lived their lives truthfully. Those are the people I want at my table.

I have over 3,000 dresses that are all made by Mr. David Glamamore. That is a really really hard question. It’s insanely hard. Yeah, I can’t pick. 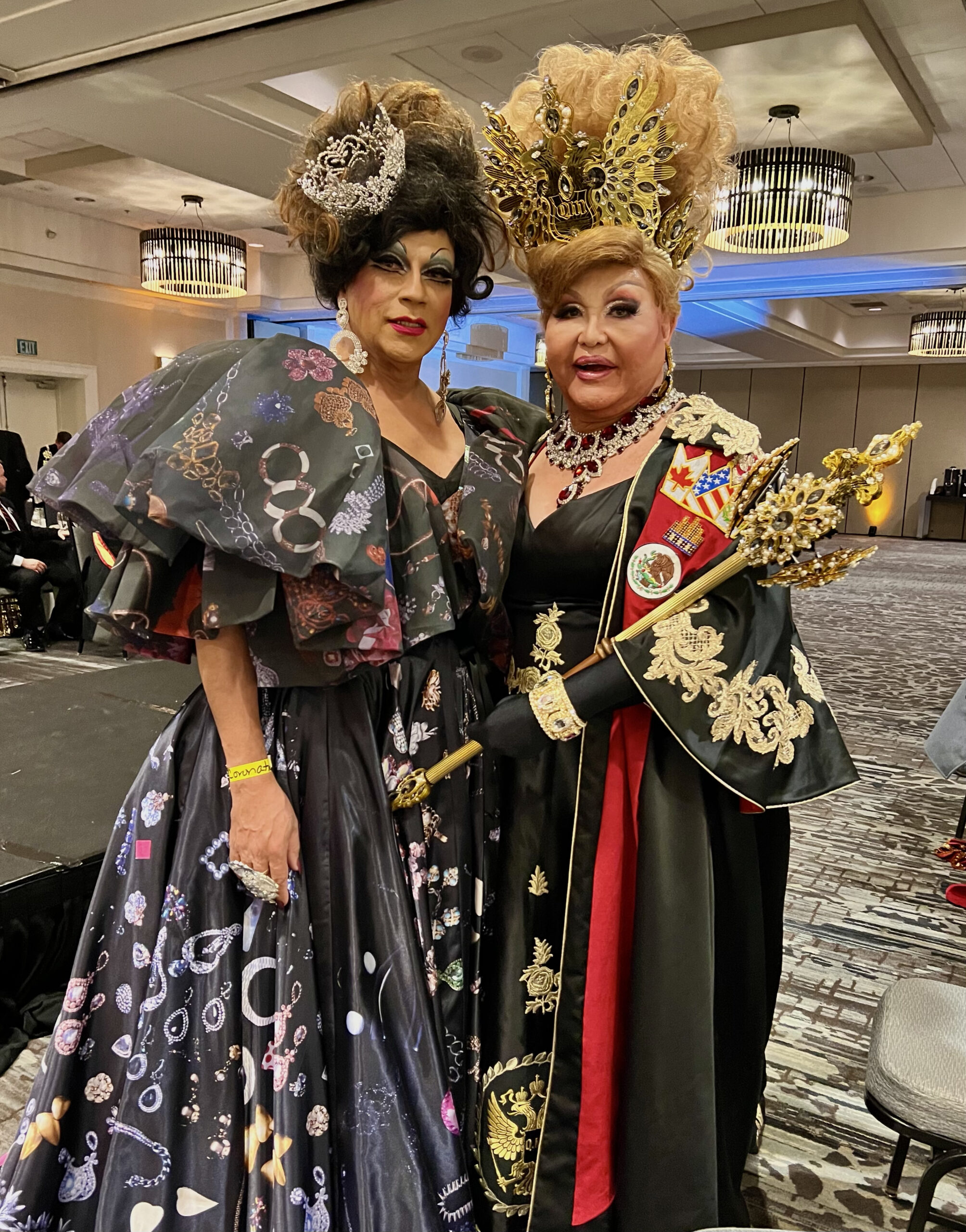 MORE! sporting one of her fabulous dresses alongside Empress Nicole the Great, the Queen Mother of the Americas within the Imperial Court System. (photo: Peter Pinon)

I tend to go more blonde.

J-Lo would love that. Favorite song to bring down the house?

To lip sync? That would be “Stormy Weather” by Lena Horne.

JM: Oh my goodness, you’re bad. When I was growing up one of my dad’s first cousins was Charlie. Charlie, for me, was a role model because Charlie was out and he was probably like 16 or 18 when I was 6. And we’d go over there for Thanksgiving and he would always have a boyfriend with him—a different boyfriend every time.

Love Charlie. Love you. This was wonderful. Thank you.