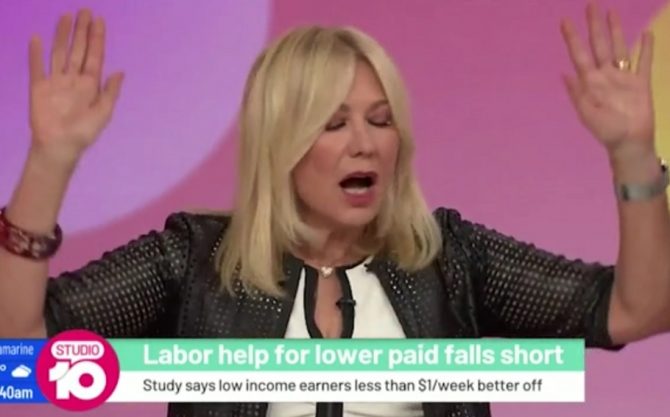 In one of the most cringe-inducing televised moments in recent memory, popular Aussie TV host Kerri-Anne Kennerley just went off on a shocking rant against transgender people.

Kennerley, who hosts the popular morning talk show Studio 10 launched into a horrifying rant over a proposed National Gender Center. The center has been pitched this week by Bill Shorten, who is running as the Labor Party candidate for the office of Prime Minister. The Labor Party has proposed the center as a means of educating the public about gender issues–including raising awareness of transgender issues with the broader public.

“I do think there’s an issue,” Kennerley said, apparently conceding the lack of education on transgender issues with the larger public. “But making a center, taking it out of the control of parents and putting it with a whole bunch of people who aren’t parents, is a recipe for danger. I’m a parent and I want an expert to take my child to. I don’t want some school educating my seven-year-old on transgender issues. No, you don’t. You’re the Labor Party — get out of my private life.”

Kennerley then went on to express her disgust over the ongoing conversation about transgender issues. “These kids out there who are gender confused, and there’s a percentage of people out there gender confused, they will put up this Commission and we, like Tasmania, will have a child and it won’t be male or female, it will be gender-free.” Her remark refers to a recent statute in Tasmania that removes gender from birth certificates.

Australians have come to view Kennerley as their self-styled Queen of Daytime TV, having worked in television for more than 50 years. In addition to her work on Studio 10, Kennerley has waded into reality television with appearances on The Celebrity Apprentice Australia and Dancing with the Stars.