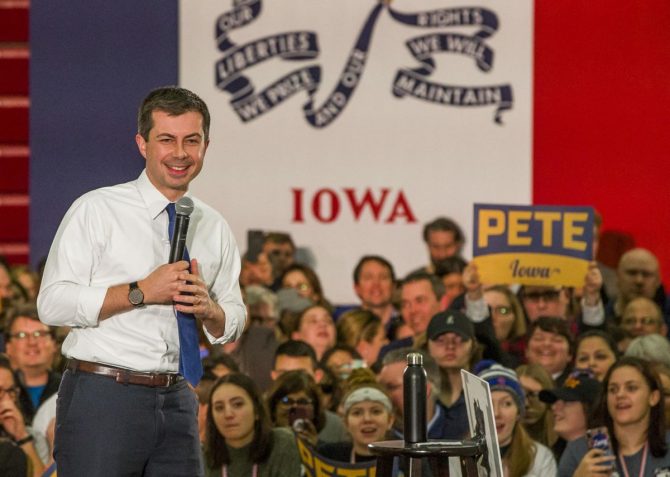 The results of the Iowa caucuses are still trickling in. So far, only 71 percent of the vote has been announced. As of right now, Pete Buttigieg is leading with 27%, followed by Bernie Sanders at 25%, and Elizabeth Warren at 18%, though those numbers could easily change as more data is released.

Despite the jury still being out, Buttigieg declared victory in Iowa on Monday night, telling supporters in Des Moines: “We are going on to New Hampshire victorious!”

When the 2020 hopeful received pushback the next day for declaring himself the victor before the Iowa Democratic Party had issued any results, he explained that his campaign’s internal data is what led him to make the declaration.

Then yesterday evening, Buttigieg’s husband, Chasten, tweeted: “It gets better.” Along with an image of himself and Pete embracing on stage in Des Moines shortly after Pete had declared victory.

Regardless of how you feel about Buttigieg or his campaign, if that doesn’t make you just a little weepy, you might want to check to see if you have a pulse.

You make me proud.

This 59-year-old gay man shed tears of joy in his office today as the results started coming in. Pete and you are making this world better and safer for younger LGBTQ folk. I love you both for taking us on this journey. I’ve never been prouder or more inspired by a campaign.

Aw man. You are Pete are gonna be a big part of the reason WHY it gets better. ❤️

One of the (many!) things I miss most about @BarackObama & @MichelleObama is seeing a mutually respectful, loving marriage at top level of politics. Thank you both for restoring my faith in that possibility. It’s important.

It does. I am gay and I don’t love your husband’s entire message. So let’s not be political here. On just an #LGBT plane. Yes. Oh goodness. It gets better. We are all human.

Related: Pete Buttigieg declares victory in Iowa… but the jury’s still out